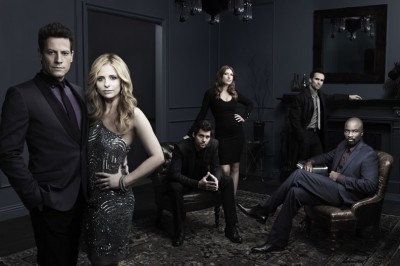 TV show description:
A former exotic dancer, Bridget Kelly (Sarah Michelle Gellar) has been sober for six months and is starting to turn her life around. That plan gets messed up when she becomes the sole witness to a professional hit. Despite the assurances of her FBI protector, Agent Victor Machado (Nestor Carbonell), Bridget knows that her life is still in great danger. She flees to New York City and doesn’t tell a soul, not even her Narcotics Anonymous sponsor, Malcolm Ward (Mike Colter).

Once in the Big Apple, Bridget reunites with her estranged twin, Siobhan Martin (also Sarah Michelle Gellar). She’s wealthy, pampered, and married to the strikingly handsome Andrew Martin (Ioan Gruffudd), a self-made millionaire who has a teenage daughter named Juliet (Zoey Deutch). Siobhan lives what appears to be a fairy tale life -– a life where no one even knows that Bridget exists.

The sisters seem to be mending their troubled relationship, until Siobhan suddenly disappears overboard while on a boat trip. Still worried for her own safety, Bridget makes the split decision to take on her sister’s identity. It turns out however that Siobhan’s life isn’t as idyllic as it first appeared. Bridget discovers shocking secrets, not only about her sister and her marriage, but also about Siobhan’s best friend Gemma (Tara Summers) and her writer husband, Henry Butler (Kristoffer Polaha).

When someone tries to kill Bridget in her sister’s penthouse, she realizes that she’s not any safer posing as Siobhan than she was living as herself.

Series Finale:
Episode 22 — I’m the Good Twin
As the vow renewal ceremony gets closer, Bridget realizes she first needs to tell Andrew the truth about who she really is. Meanwhile, just as Bodaway Macawi (guest star Zahn McClarnon) starts to close in on Bridget, Agent Machado is forced off the case and Henry decides whether he should tell Bridget the truth about Siobhan.
First aired: April 17, 2012.

I order you to air ringer back!!!!

please, bring ringer back!!! I really miss the show! it was one of the best shows on cw to watch at hand. it was one of my favorite shows to watch on tv & that I looked forward to see each week. please, don’t leave us hanging without any closure of answers. it isn’t right? give it another chance! don’t give up on it. it really had a good plot & really excellent actor like SMG! the other characters were good too! I wanted to know more about Siobhan secrets & if you died when she fell off the boat?… Read more »

This is such a good show. SMG finally had a show worthy of her talent. I would really like to see a second and third season. Also the only place you can get a DVD is from Australia. I really don’t understand why the network would not let the show find its audience.

I just finished watching the first and only season of Ringer. Just as the others I am so by the fact they cancelled a show leaving it hanging. Unfair to those who are fans and viewers who watch the network. I am irritated by the fact they pulled the plug. I am not sure is CW formerly known as WB? anyways I remember when the Roswell TVs show was going to be pulled but by many fans who were deeply upset wrote letters to the network with Tabasco bottles, it was what the main characters ate with everything. The network… Read more »

Sooo deeply disappointed in CW. Even one last 2 hour Wrap-Up would have helped with closure….will never watch CW again and will encourage everyone I know to stop as well. The Executives there should be fired!
Ringer was a great show! The story-line took some time to build but it definitely kept viewers and my friends on the edge of our seats. A 1000 times better than watching shows like “Lost”….Goodbye CW

I am so upset that the CW cancelled Ringer! Gossip Girl ended as well, so now I am only left with The Vampire Diaries and The Secret Circle, as long as they’re not cancelled also. I don’t understand why Ringer was cancelled due to the fact that it had a good plot and suspenseful storyline going for it. It was a really good show. At least bring it back to have a series finale that puts the show to an end. I can’t understand why this show is being cancelled but dumb shows like 90210 are still airing…I already watched… Read more »

BRING RINGER BACK OR AT LEAST END IT WITH WITH US KNOWING WHAT HAPPENED. I HATE IT WHEN A STATION DOES THIS. DON’T GET ME WRONG, I LOVE SCARY STORIES BUT THIS WAS ALSO GOOD, ESPECIALLY SMGELLER. I LOVE HER. AND YES , I HOPE SOMEONE TAKES UP WHERE THE SCI-FI CHANNEL LEFT OFF BECAUSE WHEN THEY BROADCAST FRIDAY NIGHT SLAMDOWNS?? WRESTLING, YOU KNOW SOMETHINGS WRONG!