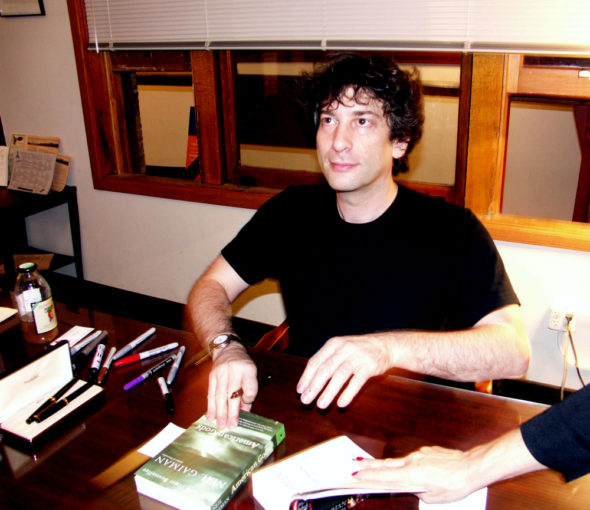 Neil Gaiman is making quite a big splash on the small screen these days. Reportedly, Netflix has issued a straight-to-series order to Warner Bros. for a Sandman TV show adaptation. No episode count or release date are available, as the deal has not officially closed. Based on Neil Gaiman’s comic series, The Sandman for DC Comics’ Vertigo imprint, the fantasy drama tells the stories of the “Endless,” fictional beings which personify different universal forces.

According to reports, writer Allan Heinberg is set as showrunner on the Netflix TV series and will executive produce with Gaiman and David Goyer. Gaiman and Goyer previously worked on a Sandman feature film adaptation for New Line, which was later dropped. Sandman follows the character Dream, of the Endless, who is also known as Morpheus and reigns over the dreamworld. Gamain recently brought a miniseries adaption of Good Omens (which he wrote with the late Terry Pratchett) to Amazon, and the television adaptation of his American Gods novel was recently renewed for a third season on Starz.

More than three years after New Line’s failed attempt to turn the graphic novel into a feature film, Netflix has signed what sources describe as a massive financial deal with Warner Bros. Television to adapt the best-seller into a live-action TV series. Sources familiar with the pact note it is the most expensive TV series that DC Entertainment has ever done.

The Netflix take represents the first Sandman TV series after numerous efforts to adapt Gaiman’s horror, fantasy and mythology tale about Morpheus, the Lord of Dreams, and the Endless, the powerful group of siblings that includes Destiny, Death, Destruction, Despair, Desire and Delirium (as well as Dream).

Sources say Warners, which controls the IP, took the Sandman TV pitch to multiple outlets, including corporate sibling HBO. The premium cable network did not make a play for the series, given the massive price tag attached (and likely number of other big world shows in the works), and Netflix snapped it up as the streamer continues to make an active play for massive IP that could be turned into subscriber-friendly franchises a la Amazon’s Lord of the Rings and HBO‘s Game of Thrones.

Since parting ways with Marvel, Netflix has aggressively pursued big-name IP — like Magic: The Gathering, The Chronicles of Narnia and the works of Roald Dahl — as the streamer courts new subscribers with exclusive new takes on beloved franchises.

What do you think? Have you read The Sandman? Will it work well as a TV series? Who would you cast in this new Netflix TV show?