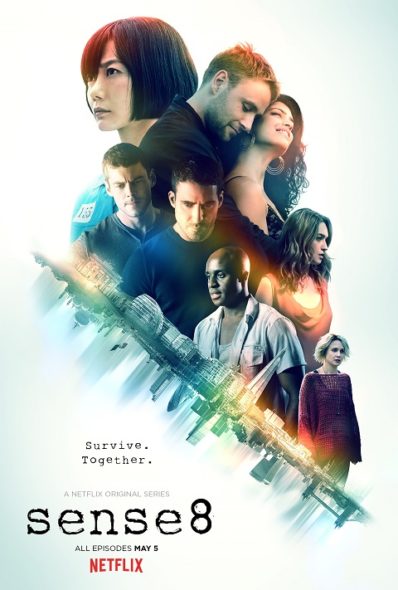 The Sense8 TV show has been cancelled. There will be no season three of the Netflix sci-fi drama from Lana Wachowski, Lilly Wachowski and J. Michael Straczynski.

Earlier this week, actor Brian J. Smith telegraphed a Sense8 cancellation could be looming, when he encourages fans on Twitter to “make some noise.”

This might be a good time to start making some noise. https://t.co/N08EgzD8E4

Today, Netflix released a statement about ending its Sense8 TV series. Check it out (via Deadline):

“After 23 episodes, 16 cities and 13 countries, the story of the Sense8 cluster is coming to an end,” Netflix VP original content Cindy Holland said in a statement. “It is everything we and the fans dreamed it would be: bold, emotional, stunning, kick ass, and outright unforgettable. Never has there been a more truly global show with an equally diverse and international cast and crew, which is only mirrored by the connected community of deeply passionate fans all around the world. We thank Lana, Lilly, Joe and Grant (Hill) for their vision, and the entire cast and crew for their craftsmanship and commitment.”

After the actors’ contracts lapsed, a couple of months ago Netflix reportedly reached out the core cast for a third season, but apparently, things didn’t work out. The second season of Sense8 dropped to Netflix on May 5, 2017, nearly two years after the series first premiered.

What do you think? Have you watched the first two seasons of Sense8? Should it have been cancelled or renewed for a third season on Netflix? Let us know below.

I just finished watching season 2 and would really love it if there are more seasons to come! It was awesome and it would be a shame not to continue!

I REALLY LOVE THIS SHOW !!!

So the execs new before the season 2 started that it was going to be cancelled, even though they new there was a cliffhanger. Next they want to blame the so called actors’ contracts not working out, yet all of the cast is tweeting and social media talking about the saving the show. As far as I’m concerned I will not stay with Netflix nor will I ever view another of their shows…EVER!!!! Passing the buck has never worked with me, and that’s exactly what they’re trying to do. There may never be another show like Sense8… and that’s a… Read more »

TV Shows get canceled all the time, what if this show wasn’t making enough money to cover its production? Since when commercial entertainment is Charity?

One series that was not like anything else. The best series of this year. Why Netflix. Now I don’t need to pay for the service any more.

Guess it wasn’t “the best”, shows canceled when they stop making money.
TV that makes money will live almost forever

I love this show terribly sad by this news.

This is really sad news. I loved this show and the topics it explored. More like this please.

please this is an awesome show it deserves to be continued and it has a great story and besides i want them to deal with BPO…i loved the fact that they stopped playing safe….so please BRING IT BACK…..why do you guys keep cancelling the interesting ones?…..please do something about it…..where can i make some noise am not on twitter….

Sense8 is the beginning of something new. It is exquisite and essential and ground breaking. We need a new innovative leader in streaming to step up and take on season 3 of Sense8. Amazon? You Tube? This is their loss, your win!

Here! Here! Jennifer! I hope You Tube picks this show up. I hate that Netflix left us with a cliffhanger. It seems like Netflix is always canceling the good shows!

I’m so sad.
I love sense 8
Can’t there at least be a conclusion finale
Must know what happens

What’s the real truth on the cancellation of sense8.That I loved by the way.at my age very few shows catch my attention.so who was at fault Netflix dragging it’s feet.or the actor’s agents dragging their feet.? Smells to me like the agent’s smell!!

Oh they had Season 2? Next time don’t wait 2 years.

I have watched this show from the very beginning and anxiously awaited for season 2 to begin even the Christmas special. What a way to treat an audience of faithful fans. This show was so creative and different from any other. The magnetism of the characters and the writing itself had you hooked. Now you decide out of the blue to cancel such as show. I expected this from networks but not from Netflix. A paid by fans organization. I am very seriously considering ending my subscription. This is not the way to say thank you. You try to fix… Read more »

NO…. I love this show! It is so original, so well cast. I have rarely gotten so emotionally involved in a TV show. And I’m no spring chicken, pushing 70 here. If you’re short on cash I can think of several OTHER SHOWS to cancel.