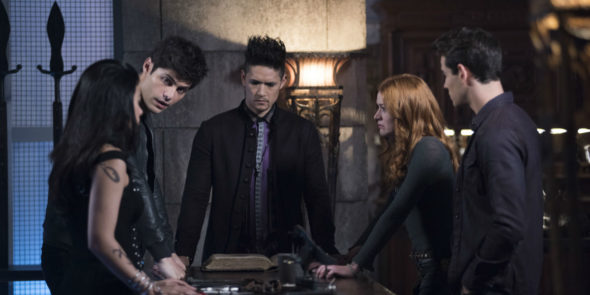 There’s good news and bad news for fans of the Shadowhunters TV show. There’s 12 more episodes of season three to come. On the downside, that dozen installments will be the end for Shadowhunters — and viewers will have to wait until Spring 2019 to see them.

A supernatural drama based on The Mortal Instruments book series by Cassandra Clare, Shadowhunters stars Katherine McNamara, Dominic Sherwood, Alberto Rosende, Emeraude Toubia, Matthew Daddario, Isaiah Mustafa, Alisha Wainwright, and Harry Shum Jr. The series centers on Clary Fray (McNamara) who, upon turning 18, learned she is from a long line of demon hunters called “Shadowhunters.” In season three, the Shadowhunters and Downworlders try to return to normal, in the wake of Valentine’s death, but everyone is keeping secrets, which never ends well.

Here are the details about the series ending:

FREEFORM ANNOUNCES A SPECIAL TWO-HOUR FINALE EVENT TO CONCLUDE THE LAST SEASON OF ‘SHADOWHUNTERS’
‘Shadowhunters: The Final Hunt’ 12-Episode Season Will Air Spring 2019
Fans Can Catch Up on the Series Now on the Freeform App

Freeform announced today the original hit series “Shadowhunters” will conclude its saga with the upcoming second half of season three and an epic two-episode special finale. Coming in spring 2019, twelve all-new episodes will culminate in a two-hour series finale event to wrap up the tale of the Shadowhunters and Downworlders that fans have loved over the past three seasons.

“We are very proud of Shadowhunters, a series that broke new ground in the genre world and became a fan favorite,” the network said in a statement. “However, along with our partners at Constantin, we reached the very difficult decision not to renew the show for a fourth season.  But, as big supporters and fans ourselves, Freeform insisted on and championed the filming of a special two-part finale that would give devoted fans a proper ending. The twelve episodes will air in spring of 2019. We want to thank our talented creators, producers, cast and crew along with our colleagues at Constantin for their hard work and dedication and to Cassie Clare for her incredible book series. We look forward to the final chapter of this breakthrough drama.”

Part of Disney|ABC Television, Freeform connects to audiences and goes beyond entertainment with bold, original programming and immersive social engagement. As Disney’s young adult television and streaming network, it delivers a unique mix of quality original and acquired series, plus fan-favorite movies and the holiday events “31 Nights of Halloween,” “Kick Off to Christmas” and “25 Days of Christmas.” The Freeform app is a service that allows viewers with participating TV subscription services access to 24/7 live viewing of the network, as well as continued on-demand access via a wide array of devices.

What do you think? Dou you like the Shadowhunters TV show? Will you be watching the final episodes? Are you sorry that Freeform is ending the series?

Me and my daughter are very sad that the show is ending. We have read all the books and know that there was so much more to come.

Truly bummed out about losing ShadowHunters! I hope that freeform rethinks their decision about Not renewing for season four. Every time I read an article I always see how this is a “groundbreaking TV show” and how it has such an “amazing fan base” and one of the “top rated shows” ECT… Then why would you not continue producing a TV show that’s actually good? There are not to many shows Playing now which I really find truly interesting and that I actually want to watch. It’s a shame that I’ll be losing Shadowhunters because now, I don’t think there’s… Read more »

ShadowHunters should not be cancelled look at all the ones that stay on the air that should be taken off the air. I don’t know where you get your rating from but this is a good show and should remain on the AIR.

that’s a shame, not happy

Shadowhunters is one of my favourite TV Shows I love the characters, cast story and #malec. Please, please, please reconsider cancelling it

I want a season 4 so bad. It’s the only show that’s caught my attention in years. I love the cast and story

great series a bit too heavy on relationships at times.and not heavy enough on magic/horror at other times…but really enjoyed it. its a shame its ending.theres so much in this “world”

Its a great show and the most touching part was when Jace died, i couldnt stop crying. Such a shame theres not going to be a season 4. 🙁

Shadow hunters should not be cancelled its one of the better shows that is on.I sat up 3 nights watching the 3 seasons on streaming. I did not know they had a series . Please , reconsider cancelling .They have a new fan .

Being a huge fan of the books, I really hate to see this series end. I believe that if they had stuck closer to the books, they wouldn’t have lost so many fans. Things just got too far out for most of us die hard book fans. It would be nice to see someone pick up the series just to see where they would take it. Hate getting hooked on a show just to watch it get canceled.

Yes, and I cannot wait for them to come out on DVD.

Not happy. I wish another network would pickup the show. As like others i really enjoyed shadowhunters.