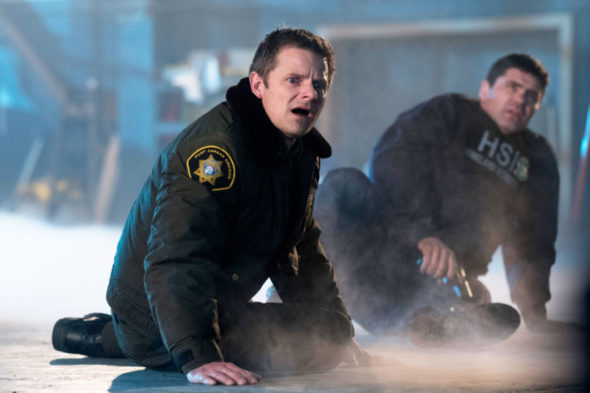 It won’t be long before The Crossing “crosses over” to the television afterlife. The TV show was one of the many cancelled TV shows of the 2017-18 season but clearly, this series has some devoted fans. Why won’t there be a second season?

An ABC sci-fi thriller, The Crossing stars Steve Zahn, Natalie Martinez, Sandrine Holt, Georgina Haig, Tommy Bastow, Rob Campbell, Rick Gomez, Marcuis W. Harris, Grant Harvey, Jay Karnes, Simone Kessell, Kelley Missal, Luc Roderique, and Bailey Skodje. Luke Camilleri recurs. The story unfolds in the small Oregon fishing town of Port Canaan. Tranquility there comes to an abrupt end, when 47 evacuees from a war-torn country wash up on the shore. The newcomers aren’t just any refugees seeking asylum — they’re Americans from 180 years in the future. As the hunt for the truth grows, it will change the lives of the townies and their new guests, forever.

The show got off to lackluster start in the ratings. The premiere of The Crossing drew a meager 0.94 rating in the 18-49 demographic with 5.40 million viewers. The second and third episodes saw significant declines and later episodes dropped as well. Last week’s installment attracted a meager 0.40 demo rating with 2.53 million.

With ratings like these, it’s easy to see why ABC decided to cancel The Crossing. It’s also no surprise that the network decided to air the final two episodes on a Saturday night.

Could the show have picked up more viewers if it had been given more time? Considering the downward trajectory of the ratings, it’s hard to make that argument. For whatever reason, The Crossing just didn’t resonate with a broad audience.

What do you think? Did you like The Crossing TV show? Would you have watched a second season of this ABC series?

Absolutely Loved this show!!! Pissed when they cancelled it! And, YES, I would watch EVERY season they made.

Bring it back guys, fed up of constantly being let down every time. It’s always the good shows that get cancelled!

The Crossing was one of ABC s better shows. Why it was cancelled and shows like “The Conners” is still on makes me question their judgment. Steve Zahn was wonderful it was good to see him weekly. I just don’t understand why it was cancelled.