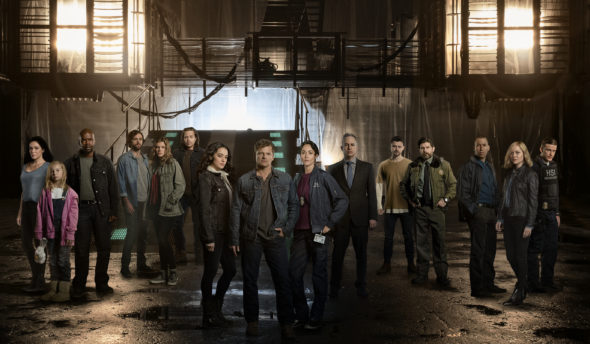 TV show description:
From creators Dan Dworkin and Jay Beattie, The Crossing TV show is a science-fiction thriller. It unfolds in the small Oregon fishing town of Port Canaan. Tranquility there comes to an abrupt end, when 47 evacuees from a war-torn country wash up on the shore.

Sheriff Jude Ellis (Zahn) is a refugee of sorts, himself. He fled Oakland and an unhappy marriage, in search of a slice of serenity for himself and his young son. When the exiles arrive, it’s clear peace and quiet are no longer on the menu.

The newcomers aren’t just any refugees seeking asylum — they’re Americans from 180 years in the future. Soon, Jude and his loyal deputy, Port Canaan lifer Nestor Rosario (Gomez), initiate an investigation, in an effort to figure out what’s really going on.

The arrivals set the town ablaze with speculation. In particular, 20-something townie Marshall (Bastow) is eager to unravel the mystery. Since he’s not big on authority, the entire situation seems likely to lead Marshall to clash with those in power.

These survivors from the future include a married couple, Caleb (Harris) and Rebecca (Kessell), who are still awash in grief over the loss of their daughter. There’s also the seemingly sweet Hannah (Missal), who is has grown much tougher than she appears, as well as Paul (Campbell), a nervous, troubled man, who yearns to explore the larger world.

Reece (Martinez) is a refugee of another order. Known as an “Apex,” she is one of the future’s genetically engineered humans. This gives her an extraordinary physical and mental edge over regular people. Once a soldier whose mission was to eliminate the lower, “Common” class, now all she wants is to locate her daughter, Leah (Skodje).

After Leah and Reece were separated during the crossing, the girl was taken to a secret camp. She’s still trying to adjust to her new environs when she manifests symptoms of an awful virus. A fighter like her mother, Leah is courageous and surprisingly creative.

The Department of Homeland Security (DHS) is also investigating the situation, and Emma Ren (Holt) is leading the charge. Unfortunately, her boss, DHS Undersecretary Craig Lindauer (Karnes), seems to be more of a hindrance than a resource. He also seems to know more than he’s willing to share.

Bryce Foster (Roderique) is Emma’s second-in-command. Compassionate though he may be, this assignment has him navigating some unfamiliar waters. Rounding out their team are DHS camp guard Roy Aronson (Harvey), who falls for one of the refugees, and virologist Dr. Sophie Forbin (Haig), who has her own reasons for looking into the Apex phenomenon.

As the hunt for the truth spreads throughout Port Canaan, it will change the lives of the townies and their new guests, forever.

Series Finale:
Episode #11 — These are the Names
The lives of the refugees hang in the balance as Jude and Nestor team up with an unlikely ally. Meanwhile, Eve and Lindauer move forward with their ruthless effort to tie up loose ends.
First aired: June 9, 2018.

Should The Crossing have been renewed for a second season? Take the poll here.

What do you think? Do you like The Crossing TV series? Should this ABC TV show have been cancelled or renewed for a second season?

one of my favourite series.

I was disappointed the series was canceled. I keep checking every year to see if it was renewed.

Why did you cancel the crossing?

Great show! what idiot cancelled it? Did ABC hire the ‘New Coke Guy’?

Crossing was very good, bring back this show and let us finish season.

I am also so sick and tired of these shows being canceled. It was a great show with no ending, as usual. I am going to stop watching network TV and check Netflix and others since these people can’t seem to stick with the good shows!!! Bring it back, it’s the least you can do, since they left it up in the air!!! Sick of this!!!!!!

I and everyone else with whom I watched The Crossing enjoyed it and was hoping for a second season.

honestly i enjoyed the crossing like no other, i think something should be done about it, netflix should pick it. i love it and i guess more people

Leave it to people who can’t follow a plot, or don’t want to think about what they are watching, the Crossing was very good, and it was going to get even better as it progressed, but we won’t get a chance to see that. Why didn’t Netflix pick it up? It was one of our favorites. This is what happens all the time. It was great that Netflix picked up Designated Survivor, that is another great show. Thank you Netflix.

Terri,
I really enjoyed the show. I invested my feelings into it. Now I’m left hanging. Please bring it back

This was a very intriguing show with a many twists and turns. I wonder why the networks cancel the better shows that they air.

I really enjoy this show. I set my DVR to record it, and only now am watching episodes, with 2 more to finish season 1. I like the wiring, the story lines, and the acting is good, though some scenes are contrived, but that’s the case in any production. I realize it’s a niche show but find it entertaining, interesting and a break from the rest of TV fair. Please go a couple more seasons!

it would be nice to see more of the show at least to bring it to a conclusion it might have not got the ratings but obviously was not really given much of a chance seeing as to when it aired. probably the worst slot of the year as far as trying to introduce a new show