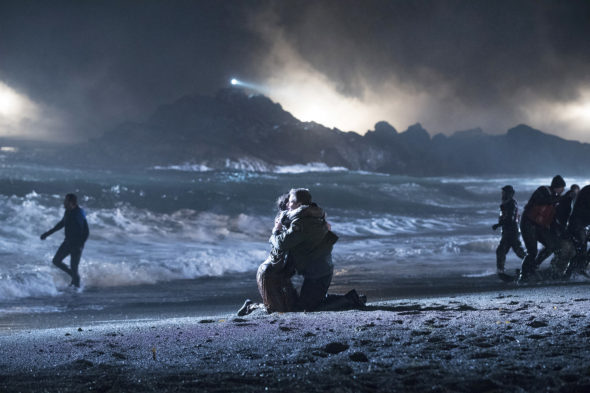 How do the people of Port Canaan fare, during the first season of The Crossing TV show on ABC? As we all know, the Nielsen ratings typically play a big role in determining whether a TV show like The Crossing is cancelled or renewed for season two. Unfortunately, most of us do not live in Nielsen households. Because many viewers feel frustration when their viewing habits and opinions aren’t considered, we’d like to offer you the chance to rate all of The Crossing season one episodes here.

What do you think? Which season one episodes of The Crossing TV series do you rate as wonderful, terrible, or somewhere between? Should ABC cancel or renew The Crossing for a second season? Don’t forget to vote, and share your thoughts, below.

Why was the other parts cancelled as it is good

Gripping plot …right from the beginning every episode had me on the edge of my seat and wanting more .. definitely hoping that their story will continue .. ample scope to continue the intrigue .. pity some good main characters were bumped off in season one .. they could create colour in possible future storyline’s

What are you thinking? This is a fantastic show! The idea of it is so fresh and intriguing. I don’t understand ? Why not try a different time or night? Great cast, I’m hooked. The new show Manifest, has a hint of The Crossing in it. It cannot come close to the drama or action or cast. BOO HISS, ABC.

well well, i,m a brit who cannot believe abc are shooting themselves in the foot. give the show some time, word of mouth will upgrade the ratings. imagine if MASH was cancelled after one season or STAR TREK. beggars belief !!!

I can’t believe they cancelled this fantastic show with no finale ending! The stations definitely need to understand they are losing their viewers everywhere because of throwing away great shows like this and keeping junk shows (seems mostly reality these days). Down with ABC. However boycotting them is a moot point for me this season. They have only one show I am interested in watching, anyway.

Boo ABC! We really enjoyed this show. Please reconsider and give us another season.

Another good show thrown out the window. Such a shame. Great cast and storyline. It had infinite possibilities.

I honestly can’t believe Crossing was cancelled. We loved this show. We looked forward to this one every week. I think the tv stations need to really take a look at all the stupid meaningless shows they keep and the good ones they cancel.

I would really like to see a second season of The Crossing. If you don’t want to put it on TV, then make it an online series. WE WANT IT BACK!

With the ratings Crossing received I don’t understand why it was cancelled. If anyone knows please let me know