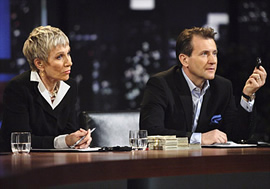 Please keep this show on! My kids learn so much from this show as well as I. We love it and its very entertaining.

Please keep Shark Tank, we all enjoy the show with all the players
along with the naive people that try to sell an unproven idea for an
outrageous amount. It is SO funny they are very entertaining.

this show would help the people have a better understanding in business and what it takes in lifes success.

We love Shark Tank. It is so enjoyable compared to other reality shows. It is so interesting and it is helping so many people. PLEASE DO NOT CANCEL.

My husband and I just started watching this show…Spring 2011 and have throughly enjoyed watching it. I hope this show isn’t cancelled. There are so little good shows on ABC that this show is truly an intertaining and intelligent show and an assest to the ABC network. My husband and I started watching it when we ran acrossed it while switching channels and gave it a shot since there was nothing worth watching at that time. We never heard of it before this but accidently came across it. We are very glad we did find it and are just sickened… Read more »