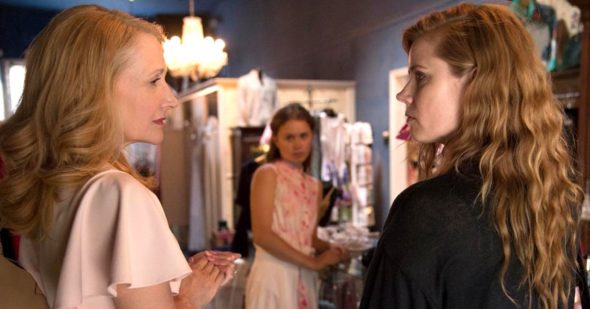 Could the first season of the Sharp Objects TV show lead to a second season on HBO? As we all know, the Nielsen ratings typically play a big role in determining whether a TV show like Sharp Objects is cancelled or renewed. (It seems like this will be a “one and done” series but, so did Big Little Lies). Unfortunately, most of us do not live in Nielsen households. Because many viewers feel frustration when their viewing habits and opinions aren’t considered, we’d like to offer you the chance to rate all of the Succession season one episodes here.

An HBO drama from novelist Gillian Flynn and Marti Noxon, Sharp Objects stars Amy Adams, Patricia Clarkson, Chris Messina, Eliza Scanlen, Elizabeth Perkins, Matt Craven, Henry Czerny, Miguel Sandoval, Taylor John Smith, Sophia Lillis, and Madison Davenport. Taking place in Missouri, Sharp Objects follows St. Louis newspaper reporter Camille Preaker (Adams) as she returns to her small hometown to file a story about two missing girls. One is found to have been gruesomely murdered while the other is still missing. Trying to put together a psychological puzzle from her past, Camille finds herself identifying with the young victims a bit too closely.

What do you think? Which season one episodes of the Sharp Objects TV series do you rate as wonderful, terrible, or somewhere in between? Should HBO renew Sharp Object for a second season? Don’t forget to vote, and share your thoughts, below.

7/26/18 update: It’s been confirmed that there won’t be a second season of the Sharp Objects TV series. Details here.