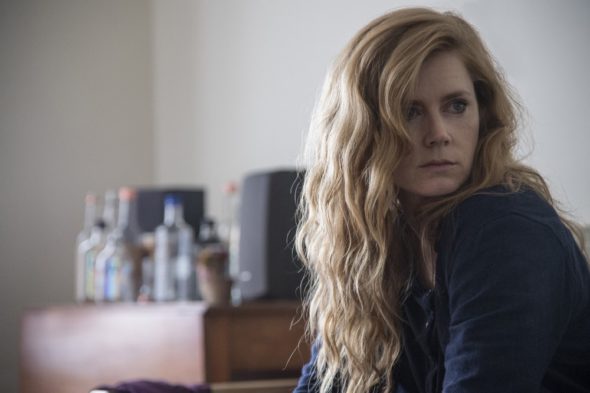 Is the story over for Camille Preaker? Has the Sharp Objects TV show been cancelled or renewed for a second season on HBO? The television vulture is watching all the latest cancellation and renewal news, so this page is the place to track the status of Sharp Objects season two. Bookmark it, or subscribe for the latest updates. Remember, the television vulture is watching your shows. Are you?

An HBO psychological drama from novelist Gillian Flynn and Marti Noxon, Sharp Objects stars Amy Adams, Patricia Clarkson, Chris Messina, Eliza Scanlen, Elizabeth Perkins, Matt Craven, Henry Czerny, Miguel Sandoval, Taylor John Smith, Sophia Lillis, and Madison Davenport. Unfolding in Missouri, the thriller follows St. Louis newspaper reporter Camille Preaker (Adams) as she returns to her small hometown to file a story about two missing girls. One is found to have been gruesomely murdered while the other is still missing. Trying to piece together a psychological puzzle from her past, Camille finds herself identifying with the young victims a bit too closely.

The first season of Sharp Objects averaged a 0.35 rating in the 18-49 demographic and 1.24 million viewers. Learn how Sharp Objects stacks up against the other HBO TV shows.

Although it premiered with very good numbers for a pay-cable TV show, it is still too early to use the ratings to predict whether HBO will want to bring Sharp Objects back for season two. It seems like a “one and done” series but, so did Big Little Lies and that’s returning for a second season. For now, I’ll keep a hungry eye on the Nielsens and update this page with breaking developments. Subscribe for free Sharp Objects cancellation or renewal alerts.

7/26/18 update: It’s been confirmed that there won’t be a second season of the Sharp Objects TV series. Details here.

What do you think? Were you hoping that the Sharp Objects TV show would be renewed for a second season?

SHARP OBJECTS was nominated for numerous GOLDEN GLOBES which is what gave me the nudge to watch the series. SHARP OBJECTS needs another season just to wrap up season one. ( Too many loose ends)