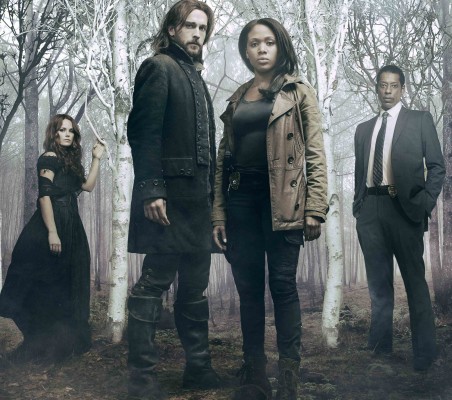 TV show description:
This mystery-adventure drama is a modern-day take on the classic Washington Irving story. Ichabod Crane (Tom Mison) is resurrected and pulled two and a half centuries through time to unravel a mystery that dates all the way back to the founding fathers. Unfortunately, the infamous Headless Horseman is also revived and goes on a murderous rampage in present-day Sleepy Hollow.

Ichabod quickly realizes that his old adversary is just the beginning, as the resurrected rider is but the first of the Four Horsemen of the Apocalypse. He’s only one of the many formidable foes that Ichabod must face to protect not only Sleepy Hollow, but the world.

In 2013 Sleepy Hollow, Ichabod discovers a town that he no longer recognizes and grapples to understand how it works. He teams up with Lieutenant Abbie Mills (Nicole Beharie), a young cop who has her own supernatural experiences.

Clues from the past enlighten mysteries in the present, thanks to flashbacks of Ichabod’s life in 1776. The divide between present and past become dangerously blurred and lives are left in the balance — including that of Ichabod’s late wife, Katrina (Katia Winter), who’s trapped in a mysterious netherworld. In his pursuit to save her, Ichabod uncovers secrets about her which leave him with even more questions.

Not everyone believes Ichabod’s tales of 1776 and supernatural evils — especially the new head of Abbie’s police precinct, Captain Frank Irving (Orlando Jones). When faced with bizarre events he can’t explain, Irving reluctantly turns to Ichabod and Abbie to investigate.

The complex pasts of Ichabod and Abbie — from his inclusion in the powerful and secretive Freemasons Society to her childhood visions — will help them solve the intricate puzzles of Sleepy Hollow and hopefully save the world.

What do you think? Do you like the Sleepy Hollow TV series? Do you think it should be cancelled or renewed for another season?

So inventive, I can’t wait to see it each week! Please don’t cancel it….it’s great television drama. The leads are fantastic and believable, the story lines are interesting!!!!!!!!! I LOVE THIS SHOW!

I tought my DVR was not working. What happened to the show ?
It was great tv. The reality shows suck bring back the writers

Last week’s was a rerun and this week’s was pre-empted by the World Series.

My whole family enjoys Sleepy Hollow. What is going on? Did the season end? I LOVE these types of shows!!!

DO NOT cancel!!! Great show to watch!

Please do not cancel Sleepy Hollow I love the show.. I look forward to Monday nights.

While I do like the show I can’t help but wonder about though. First, how can you live in a town called Sleepy Hollow and have no knowledge about someone named Ichabod Crane? Second, when is he going to take a bath, wash his hair and put on some clean clothes? After 200 years the guy has to be ripe and those clothes ready to fall off! I wish this would have been on a cable channel, because the writers at fox are limited.

He has had his clothes made & his hair cut.
You must have missed the episode where he met a lovely girl who made historic clothing. While they were on their way to a romance his job interferred. Do you need to see him actually in the shower??? Clearly he’s well groomed.

Love the show… don’t cancel it!

I certainly hope this show will be given more time to develop. It has great potential, good storylines, excellent acting. It is far better than most of the sop being offered up.

Do not cancel,like the show.

I literally WAIT for Monday nights since Sleepy Hollow has started! I love this show and the person who plays Ichabod is straight on with his acting. PLEASE renew this series and allow people to discover the best new show of the season! I go through the night’s episode as I am trying to fall asleep and wish it was 2 hours rather than one. I have NEVER written anything for another series in my 58 years on this earth. Please keep it coming!

Love this show! Hope it gets renewed!!

Love it! I hope they don’t cancel it any time soon.

Love the show. Also love Once Upon A Time. Hope they last a long time.

What a great series and of course, because I like it, it will probably won’t last long. Looking forward to next week.

Omg it is good the end of the pilot really freaked me out tho.