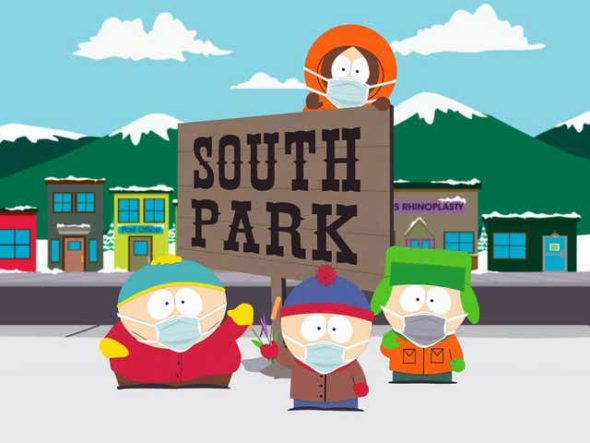 Stan, Kyle, Cartman, and Kenny may not be growing up but these kids are sticking around for a long time. Comedy Central has renewed the South Park TV series for four more years, keeping the show on the air through season 30. The animated comedy had already been renewed through its 26th season and is expected to kick off its 24th season later this year.

In addition, Paramount+ has ordered 14 made-for-streaming South Park movies and two will air by the end of 2021. MTV Entertainment Studios made a new deal with series co-creators Trey Parker and Matt Stone that will keep them at work through 2027.

This new and expansive deal with MTV Entertainment Studios encompasses the following distribution:

“Matt and Trey are world-class creatives who brilliantly use their outrageous humor to skewer the absurdities of our culture and we are excited to expand and deepen our long relationship with them to help fuel Paramount+ and Comedy Central,” said Chris McCarthy, President/CEO -MTV Entertainment & CCO/Adult Animation – Paramount+. “Franchising marquee content like South Park and developing new IP with tremendous talent like Matt and Trey, is at the heart of our strategy to continue growing Paramount+.”

“Comedy Central has been our home for 25 years and we’re really happy that they’ve made a commitment to us for the next 75 years,” said Parker and Stone. “When we came to ViacomCBS with a different way to produce the show during the pandemic, Chris (McCarthy), Nina (Diaz), Keyes (Hill-Edgar) and Tanya (Giles) were immediately supportive and enabled us to try something new that turned out to be really well received. We can’t wait to get back to doing traditional South Park episodes but now we can also try out new formats. It’s great to have partners who will always take a chance with us.”

South Park continues to keep its place in the cultural zeitgeist with this year’s South ParQ Vaccination Special which ranks as the #1 cable telecast of the year with nearly 3.5M total viewers across the night and The Pandemic Special, which reigns as cable’s #1 scripted telecast of 2020. In addition, South Park received its 19th Emmy nomination with a nod for The Pandemic Special in the Outstanding Animated Program category. The series has earned five Emmy Awards to date and a George Foster Peabody Award.

The deals were negotiated by their long-time attorney, Kevin Morris and Park County’s Keith Pizzi.

Check out our status sheets to track new TV series pickups, renewals, and cancellations. You can find lists of cancelled shows here.
What do you think? Do you watch the South Park TV series? How long do you think this animated comedy will run?