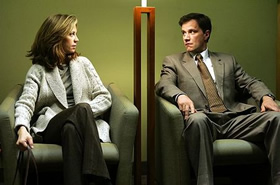 Eight months after HBO picked up Tell Me You Love Me for a second year, the TV series hasn’t returned. Now, apparently, it never will. What happened?

The sexually-explicit drama debuted on September 9, 2007 and revolves around three couples, each with their own set of intimacy problems. They seek help from Dr. May Foster (Jane Alexander), an analyst with relationship issues of her own. The series’ ensemble cast includes Michelle Borth, Tim DeKay, Luke Kirby, Adam Scott, David Selby, Katharine Towne, Sonya Walger, and Ally Walker. The tenth episode aired on November 10, 2007.

The ratings for the show’s first season weren’t great but HBO renewed Tell Me for another season after just four episodes had aired. Despite the renewal, the show didn’t return to production. Now, it appears that the reason for the stall was that creator/executive producer Cynthia Mort couldn’t figure out what should come next.

In a written statement, she said, “Given the considerable amount of time that has passed and despite the best efforts of everyone involved, we were unable to find the direction of the show for the second season. There are so many other stories to tell and many other ways to tell them. I look forward to doing that with HBO in the future.”

The cancellation decision was apparently a mutual decision. HBO has a development deal with Mort and intends to continue working with her. Michael Lombardo, HBO’s West Coast president, said, “We really feel Cynthia has an important voice that belongs on HBO and we look forward to the next show she will create for us.” Stay tuned!

Reader
Left in the Dust

HBO is blowing it! How can you even consider running a series without thinking about the 2nd season? That says alot about the writer and HBO. Fortunately, we have SHOWTIME and they are leaving HBO in the dust. I Sincerely hope the Producers at HBO are banging on Cynthia Mort’s door right now and telling her to either find some creative expression for Season 2 or find a new job. Hell, I was so entranced by this series that I KNOW I could write the 2nd season and beyond. I have been a loyal HBO viewer and will continue to… Read more »

That sux!!! I was really looking forward to the show. I find it hard to believe that it got low ratings..i was hooked from the first episode. I’ve been waiting and decided to google it because I hadn’t heard anything yet. Boy, am I disappointed!! I can think of plenty of things that need to be cancelled but this series isn’t one for sure. I’m with Shelly, if the writer needs help she can give me a call — I’d be happy to help!!!

I’m so sad : ( I have been waiting for the second season and have told so many people about it and now they are waiting too. If the writer is having problems coming up with new material, hire me I can help her. I can’t believe how they can just keep us hanging, that really sucks.

I am disappointed to learn that this show has been cancelled – I was looking forward to season 2.

I am sooo upset Ive been waiting forever for this show to come back on. Now I found out it never will. Im sick of getting invested in shows only for them to get cancelled. I too am making a note of this writers name because I will never watch anything shes on again.

I was looking forward to season 2, and am disappointed to read that it was canceled. I think this is a huge mistake!

Very disappointed. Loved this show! Even Howard Stern bragged about how good the show was on the air! This was the topic of many convesations with my friends. 🙁

just watched the show unwillingly. terrible, even the fake sex scenes. great decision to cancel it b/c other than explicit fake sex, the stories are truly going nowhere. fell into asleep half way through. HBO shouldn’t even announce picking up second season in the first place. I’d rather watch any NBC shows than this.

you need to get this show back and it will get an audience..it was a great show and one of the few i looked forward to every week

I just found this out! I am so disappointed. 🙁 This was one of the most real shows on the air. I have been waiting months to find out what would come next!

I loved this show and i am really upset that i recommended it to friends to watch. If i would have known it was never coming back on i wouldn’t have bothered. What are the fans supposed to do with a season that ended the way it did and not have any resolve for what happen next? Hell i could write the next season if its too hard for a screenwriter to do. HBO should consider getting SOMEONE to continue this show if she can’t. It was an awesome show.

I am truly sad that the show has been cancelled. Its pathetic that they use lack of inspiration as reason to cancel a show that really hit home. This show was something that i could relate to. I am sad to see the loss of such a compelling story. I can only hope HBO has sense enough to bring it back.

Am very disappointed that this show will not return. As many here, i will remember the name Cynthia Mort in the context that she lacks creativity and will not be thought highly of in my mind. She had a great chance at making a legacy for being a great “real” writer and she blew it! If you claim to be a writer, be one! Not someone who “runs out” of creativity when needing to write a second season. This show will be missed in our house, we loved the show and all the issues it dealt with. It felt like… Read more »

I agree with Tanya. After a whole season of following these characters we’re just left hanging. Why not write this as a film if you have nowhere to go with it? I can’t believe this writer did not have enough of a creative mind to continue these stories. I could come up with some great ones myself!! I think this writer’s credibility has definitely been damaged & I wouldn’t think much of hbo giving her another chance with a series. What has happened to hbo shows anyway? All the good ones are on Showtime.