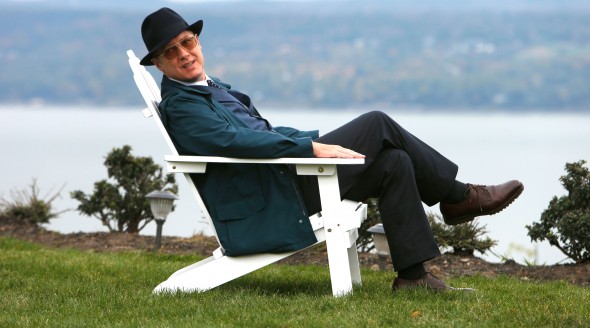 Showrunner Jon Bokenkamp says NBC has renewed its James Spader series, The Blacklist, for a fourth season. Bokenkamp broke the news during an interview with Troy Heinritz and Aaron Peterson of “The Blacklist Exposed” podcast, hosted on Golden Spiral Media.

Variety reports it has confirmed the renewal, and quotes Bokenkamp’s remarks to the podcast:

“We knew about that a while ago, it’s one of those things that’s hard to keep quiet. But yes, we’re renewed through the fourth season,” Bokenkamp revealed during the interview.

Currently in its third season, The Blacklist has fallen in the ratings each year. Some of its slide can be attributed to the show’s move from Monday nights to Thursdays, which have long been a problem for the Peacock Network.

The Blacklist‘s ratings are down from season one and season two. Still, this season’s ratings are high enough land the series in the top half of NBC’s scripted shows. As of December 7, 2015, The Blacklist ranked sixth out of NBC’s 13 scripted series, airing in the fall of 2015.

The Blacklist is not the first NBC series to get an early renewal, this television season. NBC renewed freshman hit drama, Blindspot, back in November.

NBC also renewed Chicago Fire for a fifth season, while the drama was only four episodes into season four. Likewise, it renewed its Chicago PD TV show for a fourth season.

The Blacklist is set to return with the second half of season three, Thursday, January 7, 2016 at 9:00pm ET/PT.

What do you think? Are you a fan of The Blacklist TV show? Are you surprised it has been renewed, despite its ratings decline? Do you plan to tune in for the second half of season three and for season four?

The NBC lineup is the best it’s ever been with The Blacklist at the top!!
Love James Spader…outstanding actors in this.

Love this show and James Spader!! Looking forward to Season Four and I will watch no matter what day or time slot it gets. Best show ever!

I think that it is one of the best shows currently on television!

this is a great show. Hope ratings will improve. Tonight’s shocker, death of Liz, not a good omen for show’s ratings.

Love this show and it’s cast! Congrats on a 4th season! Tonight’s episode made me cry

This is my favorite show thank goodness it’s staying on!

#1 show on television! Love the characters and the complexity of story lines. Doesn’t get any better!!

Look forward to season 4 of Blacklist.

keep those episodes coming! i’ve loved the show since the 1st episode. hope i gets a time slot that improves the ratings

I am totally obsessed with the Blacklist! Please keep it coming!

I am a latecomer and totally hooked. So glad to hear there will be a 4th season.

James Spader is FANTASTIC in The Blacklist and i will continue to watch it on any night that it is on for as long as the show airs. Hopefully another couple of years at least.

I plan on watching the Blacklist anytime, anyplace, and anywhere. It is one of the BEST shows I have watched and hope it continues for many years despite the ratings, It is the fault of the Network that contribute to the low rating by moving it to a bad spot.