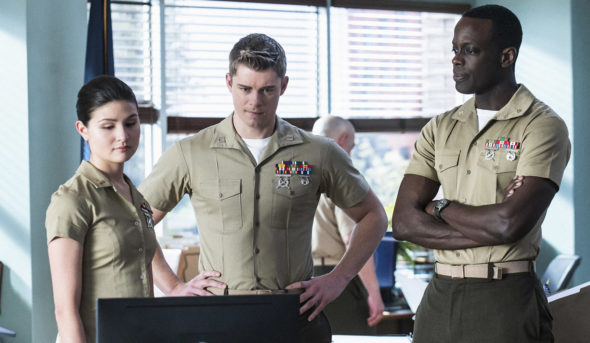 If you’ve been looking forward to watching The Code TV show on CBS this Monday night, you’re going to be disappointed. The network has pulled the drama series from the schedule. Will it back? Has it been cancelled?

The first season of The Code debuted in April drew pretty low ratings, right from the start. The eight aired episodes have averaged a 0.57 rating in the 18-49 demographic and 5.10 million viewers in the live + same day ratings. It’s one of CBS’ lowest-rated scripted shows of the 2018-19 season.

The Code has been pulled from the schedule and will, for the immediate future, be replaced by reruns of Magnum PI. Right now, the plan is for The Code to return on Monday, July 1st, but those plans could change.

While The Code hasn’t been officially cancelled yet, CBS pulling the series from the schedule certainly points in that direction. Some of the series’ small audience will get out of the habit of watching the program and the first week in July is traditionally one of the lowest-watched weeks of television. The ratings for the next episode will be much lower than they have been.

If there was any hope of The Code surviving to see a second season, I think this move makes it clear that CBS has given up on the series.

What do you think? Do you like The Code TV show? Do you think it will be cancelled? Would you watch season two?

who in the world judges these shows 1 season on Monday night give me a break this was a good spin from jag i personally enjoyed it to bad had to make more room for game shows or reality tv.

I would watch a second season of :The Code”, It is very important to the way the world is today.

First off I’m retired USCG, Lt. Boarding Officer, my first show was a turn off for me. But was done very well and will let the TV public make the final decision to view it. Thanks for letting me give my opinion .