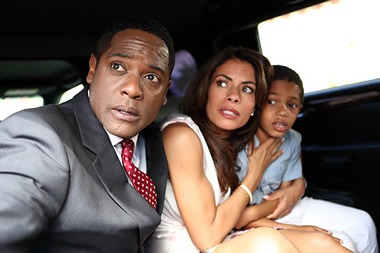 I’ve been watching, but it’s gotten to the point where I DVR it and watch it when there’s nothing else left. Not a good sign. I’m not quite ready to give up on it, but if it doesn’t improve I’m going to stop watching. I don’t think it’s a terrible show, and I don’t think it’s a great show. They’re trying to combine too many things. The mystery of Lost, the adrenaline of 24, the ensemble cast of Heroes, it’s just too much. What we end up with is a show that jumps around too much, is somewhat confusing, and… Read more »

just caught up and i love this show. it started really slow, but i’ve been looking for something to fill the void that “lost” left and i think this might be the one. if they mess if up on the renewal episodes, then good riddance. but here’s to hoping they keep this show going. it’d be a shame if they fudge up an amazing concept like flashforward did.

i agree with some of the above statements….. I HATE”REALITY”SHOWS!the event is a show worth watching. People , if you are not watching this show you are relly missing out

The biggest problem I have with this show is the “aliens”. They crash land on earth and know how to turn on a lightswitch and speak perfect English? And they don’t age, do they have kids, do they fall in love in 60 years? And if they are “illegal” aliens, exactly where do we deport them to? And the very first interaction between them and modern day Pres is confrontational? I’ve given this series a change, but there is just too much nonsense, unnecessary violence and same old 50’s plot of alien invasion w/no purpose. After experiencing so many “good”… Read more »

If they cancel this show, I will swear off any and all shows of its ilk.

its like buying a novel and getting half way through it and the remaining pages are blank.

we watched Flash Forward and Jerico and were victims of this crap………..NO MORE!

When I First saw commercials for the Event, I doubted I would stick with it. Watched the first episdoe and it was, ok.. I stuck with it as I wasn’t watching a 9:00 show since Heroes was gone. After the first episode, I have gotten hooked on the show and love it now. I think Jason Ritter is doing a great job, first time seeing him act and reminds me of John… The biggest question I have with the show is, Why is Jason Ritters character so important?

Flashbacks seems to have slowed down a bit which is good…

I’m not a huge fan, but I tape the show and watch it later so I can fast forward the commercials! That is not what a network wants to hear! Jason Ritter is so good in his part, but he’d be even better if he was given good material to work with! The show is slow and uninspiring, and I feel it is trying too hard to be like “Lost” with the flashbacks, but instead they just keep jumping around time in a negative way! I will probably watch the reat of the season – taped – but only out… Read more »

Have people ever heard the phrase… “If you don’t have anything nice to say, don’t say anything at all.”? The Ev3nt in my opinion just keeps getting better and better. I am not saying there are not flaws….but I am loving it. It is addicting, and gives a great mixture of Science Fiction and Conspiracy. In episode’s 4 and 5 I saw a lot more character development. I think they wanted to keep the show at such a fast pace(people complained of FF becoming “Boring”)- and in the meantime- could not give character development and keep that pace. They now… Read more »

I totally agree with you! Sure there are flaws, every TV shows out there have them, but The Ev3nt is great! There are so many twists and turns, that it is almost impossible to not want more! I would be seriously disapointed if they cancelled it.

I agree that there is to much jumping forward and backward, but besides that why do so many people think its a terrible show. When people make comments it would be nice to know what about the show they think is “terrible” rather than just saying its terrible. If people were more specific maybe it would help the writers of the show to understand how they could improve.

The reason the rating are so slow is becasue the show is terrible. I watched one time and thats all it took for me to not watch it again.

So you watch a show once and decide that’s it! I think that is a ludicrous way to evaluate a series of any kind and a typical example of the narrow attention span modern audiences have. Its no wonder its so difficult to get a series off the ground when people cannot be bothered to give a new series a reasonable chance.

TOO MUCH JUMPING FORWARD AND BACKWARD IN TIME

I’m sick of this U.S. viewers: they dismiss the good american fiction and make europeans demanding for more. I’m spaniard, and I don’t understand this trend against the awsome creativity of TVs by U.S. audiences. After all, it’ll happen: same histories, no risk: boring and sure business. Movies did… and only children (or childy people) go to theaters. Do you really want the same reality-sh** forever? The same old and known thing over and over…?

Good shows get killed because people only want mindless entertainment like REALITY SHOWS….Give me a frickin’ break!

you hit that fight on the head, i HATE SO CALLED REALITY SHOWS!!!!!!

I have been watching but am ready to give up. The story line is o.k. but I don’t like the back and forth jumps. Too confusing.

I gotta agree. They jump back on forth between 4 years ago and to present too much. And people are gonna get tired of trying to keep up with a show that’s not completely wowing them. If they get people to like it then maybe they’ll have a 3rd season. Yeah I’m pretty sure they’ll have a 2nd. About 80% right now. They gave it a full season so, put two and two together.

Hi, I write from Italy. I’ve seen the first two episodes of ”The Event” and I liked them. It’s too early for me to say if the show deserves a second season but I really hope Nbc will make a real last episode if they decide to close it at the end of the first seson. I was really upset by ”FlashForward” finale, not to talk about ”Happy Town” an Abc show (right?) that was aired last month in Italy with two final episodes that I consider outragious for viewers!

Make no mistake, as a fan of the show I want it to succeed. However, some problems The Event has is a rather generic plot and characters in need of some boosting. What differentiates this and Flashforward from the successful serial dramas of Lost, Heroes, and 24 is that The Event and Flashforward already give away their overarching idea or plot; we know that there will be “an Event” or that the plot will circulate around a “flashforward”. With Lost, Heroes, and 24 the viewers learned and explored with the characters. They too were in a labyrinth instead of in… Read more »