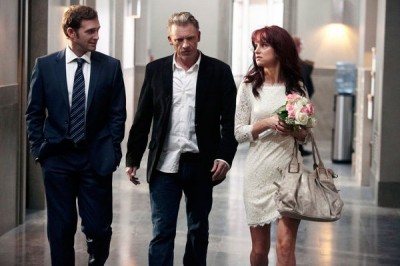 It’s been a rough road for Mitch MicDeere. Now, it’s come to an end — at least on NBC. The Firm has been cancelled after one season of 22 episodes.

The Firm picks up years after the young attorney (Josh Lucas) made his deal with the mob to take his old crooked law firm down. He and his family have come out of hiding but their problems haven’t gone away. The show also stars Molly Parker, Callum Keith Rennie, Juliette Lewis, Natasha Calis, Tricia Helfer, Martin Donovan, Shaun Majumder, and Paulino Nunes.

The series represented one of NBC’s biggest launches of the season but it misfired right from the start. The two-hour premiere brought in a dismal 1.4 rating in the 18-49 demographic with just 6.32 million viewers.

When The Firm moved to its regular timeslot on Thursdays a few days later, the numbers got even worse. Week two dropped 29% in the demo and the ratings kept falling in subsequent weeks. After hitting an embarrassing low for a primetime show — a 0.8 demo rating with 2.97 million viewers — NBC sent it packing to Saturday nights.

The numbers have been awful since that move — even for a Saturday night show. It’s frequently outperformed by movies and crime drama reruns on the other networks.

To date, The Firm has an average of a 0.7 rating in the demo and 2.10 million viewers. On our NBC Ratings Report Card, which measures the relative demo success of shows on the network, the show has a “D-” grade — even after low viewership is taken into account.

On the positive side, NBC’s deal for The Firm is unique and a bit more like the one the network had for Merlin, the supernatural drama produced by the BBC.

Sony and eOne partnered to produce The Firm, primarily for the overseas market. Thanks to pre-sales and Canadian production tax credits, the cost of producing the series was already paid for and NBC was able to pick up the show for a greatly reduced licensing fee, just like any other secondary buyer.

Not surprisingly, The Firm won’t be back on NBC (according to TVWise) because the network has opted not to renew its deal with Sony and eOne. The series could continue to be produced for other markets however and even possibly be picked up by a cable channel here in the US. There’s been no word on the show’s fate beyond NBC so, for now, we’ll have to wait and see.

There are 22 episodes in the first season of The Firm and tonight’s marks the 17th. Right now, the finale is slated for June 23rd. If a second season isn’t going to be produced, hopefully the last episode will supply enough closure for the few million faithful viewers who’ve kept watching.

What do you think? Are you sorry that NBC isn’t continuing the show? Would you watch on another channel or purchase season two on DVD?

Please renew the firm. I love that show

I thought THe Firm was a great show, I was really looking forward to the second season.

Great show. NBC really lost out on this one. So much better then How To Get Away With Murder or any of the other legal shows out right now.

This is one of the best shows I’ve watched in a long time! I’m in disbelief at the numbers posted in this article! Great writing, perducing, cast, acting and story! After ep 22 I was very Furious at NBC, not just because it got canceled but, the way they left it hanging! How this happened, I can’t understand.. Perhaps some faulty Intel, or maybe a faulty advertising team?.?.?. I feel sorry for the perducers and actors, and Furious at NBC! Please Hulu, pick this up and at least finish it with season 2 if not more.. If advertised correctly, in… Read more »

Enjoyed watching The Firm. My husband and I would definitely watch season 2 , 3, 4, etc if ever aired. Loved the production, acting, and story lines of each episode.

The Firm is one of the best shows on TV, each episode has you on pins and needles to see the outcome. NBC blew it, maybe Netflix will pick it up.

First we get hooked on this legal thriller on HULU; written and produced by an even greater author, then we discover that episode 22 of season one is the end, the finale, no more of The Firm. Very, Very, Very Sour Grapes! Especially leaving us with a cliff hanger; Mitch running from . . . something once again???

Here it is 2017, I’m just finding this. Which means I never heard of it in 2012. LOVED it! Great series, wish it would continue

Please make a season two! At least for Hulu or Netflix! I just finished the last episode Dec. 2,2017

I watched season 1 on dvd. I look forward to The Firm season 2. Stories were very well written. The production was of high standard. I am prepared to get the next dvd.

Just finished watching all 22 episodes. Was so invested in the show it only took one week to binge watch all the episodes. But the last episode leave SR hanging, what happens to Mitch and Abby and is there a mob war between the Italians in the Russians and was the FBI instrumental in framing Joey’s friend. I’m disappointed that rating spent so much that a good show is canceled. The acting was excellent and the storylines were quite intriguing. All the subplots for every episode always kept us engaged and wanting more. And the last episode leaves us needing… Read more »

Now am not happy that season two will not be produced. Why would they do that, after having us hung on watching it?

Is October 17 I finish watch ep.22 I will love to watch 2nd season

My husband and I just finished watching the last episode, and we’re bummed to see that there was no season 2. We were hooked! We would definitely watch season 2 if it were to come back.