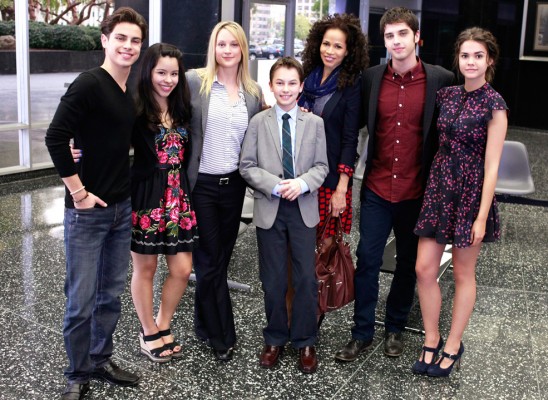 ABC Family has announced that they’ve renewed The Fosters for a third season. No word on how many episodes have been ordered or when they’ll air but the second season will resume on Monday, January 19th.

In addition, the cable channel has ordered a new unscripted series — Job or No Job — which will follow young adults’ journey to land their first professional job.

Burbank, CA (January 13, 2015) – ABC Family today announced its hit original drama series “The Fosters” will return for a third season and has picked up a new unscripted series “Job or No Job.” “The Fosters” will premiere all-new episodes from the second season on Monday, January 19, 8:00PM – 9:00PM ET/PT, picking up from the holiday episode cliffhanger.

“We are thrilled to be making more episodes of ‘The Fosters’ – a show that has not only garnered critical acclaim and numerous awards but resonates with our passionate and committed audience,” said Karey Burke, Executive Vice President, Programming and Development, ABC Family. “‘Job or No Job’ is also an important addition to our growing reality slate that will appeal to anyone who has ever gone on a job interview.”

“The Fosters” is a compelling, one-hour drama about a multi-ethnic family mix of foster and biological teenaged kids being raised by two moms. Stef Adams Foster, a dedicated police officer, and her wife, Lena Adams Foster, a school Vice Principal, have built a close-knit, loving family with Stef’s biological son from a previous marriage, Brandon, and their adopted twins, Mariana and Jesus. Recently added to the mix are their newly adopted son, Jude, and his sister, Callie, who is striving toward adoption as well despite the roadblocks caused by her tumultuous family history.

“Job or No Job” is a formatted unscripted series from the producers of “Undercover Boss” that follows one young adult per episode on his/her journey to land a first job. Each job seeker will Go On three interviews, and we will watch the intense ride to find out if he or she lands three, two, one… or zero offers.

What do you think? Do you like The Fosters TV show? How long do you think this should should run?

I really hope they renew so I can have a show really enjoy. This show touches on the real life of teenagers and youth in foster care.Please don’t Discontinued this show. I realize that a lot of people aren’t tuning in on the scheduled nights. My children have school and sport their involved in but love they show. This is way people pay for Netflix.Hulu, & record it on theur DVR so we don’t miss it.

Love the emotion and the reflection of all the ups and downs of family life no matter what the make-up! I am 55 y/o, and can relate to all the ‘stuff’ of raising the family!

i also love to watch PLL too