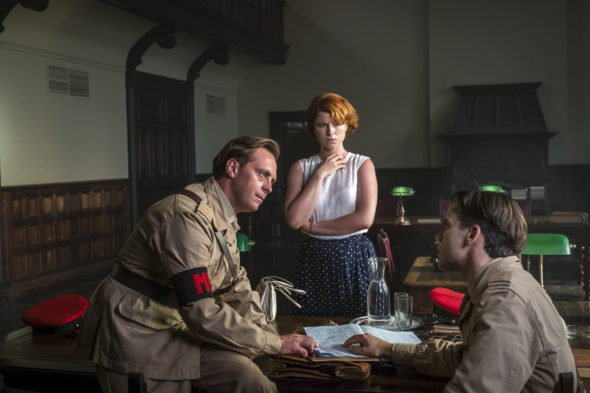 TV show description:
A 1960s military historical drama from creator and writer Peter Moffat, The Last Post TV show unfolds in Aden, Yemen. It revolves around the officers of a Royal Military Police unit and their families. The British drama originally aired on BBC One in UK.

The story centers on the men who serve as soldiers and police officers. Since they are also husbands and fathers, it is not just their lives on the line. Their families are also at risk of any uprising or threat.

It is not only the men who are called to sacrifice by the very nature of their positions. Their wives also feel the pressure to conform to life as a military spouse, while still feeling the pull to be themselves, far from home, at the dawn of a new age.

Despite the ever present danger of hand grenades, mines, and sniper attacks, life goes on and so does love. And now, in the swinging ’60s, the siren song of sexual liberation is ringing in everyone’s ear.

New on the scene, dapper and debonair RMP Captain Joe Martin (Neumark-Jones) and his bride, Honor (Buckley), have an aura of glamor to them, not unlike JFK and Jackie. Posting to Yemen seems, at first, to be just another adventure in their new life together, but does Honor really understand who her new husband is?

Although he has been stationed in Aden for some time, and expected to replace Captain Nick Page (Kennedy), Lt Ed Laithwaite (Moore) is passed over, in favor of Joe. Meanwhile, Ed’s wife, Alison (Raine), who has been having an affair with Nick, takes Honor under her wing.

Lively, witty, and thoroughly modern, Alison is ready to live and resolves to drag Honor along with her. Alison and Ed have grown apart during their time in Yemen. Will they find their way back together?

At the opposite end of the spectrum is Mary Markham (Drew). This ideal officer’s wife is the embodiment of loyalty and duty. As such, everyone turns to her for her advice and assistance. Still, her fortitude will be severely tried, when her own family is at stake.

Mary’s husband, Major Harry Markham (Miles) is the unit’s Commanding Officer. He feels a great sense of accomplishment that he has never lost anyone in his charge. How Harry will hold up, should that change, remains to be seen.

As the insurgency intensifies, these officers and their families must confront difficult questions. They begin to wonder why they are in Yemen, whether they should be, and if it is even okay to ask these things. As the norms of the 1950s drift away like dust on the wind, who will thrive and who will falter? Stay tuned.

Series Finale:
Episode #6: “The Bigger Picture”
Joe faces court martial for disobeying orders and will risk losing Honor when she discovers the truth about his past. Fearing for Yusra’s (Elma) safety, Armstrong leaves base to find her. Martha (Davis) discovers a shocking truth about secret British Government negotiations. The fate of many will be in Markham’s hands. (Courtesy of Amazon)
First aired: December 22, 2017

What do you think? Do you like The Last Post TV series? Should this BBC One and Amazon TV show have been cancelled or renewed for season two?

Please, please, please renew The Last Post. I would really love to see a second series. The first series was excellent and the cast were wonderful.

I loved The Last Post and am very sorry that it has been cancelled. I really wish this would make a comback.

Horrible decision to cancel this quality program! I

Thoroughly enjoyed this series and want more! We have enjoyed many Amazon series like Bosch and Goliath, to name just two. However, The Last Post was a totally different type of series with much less violence and obscene language. Also enjoyed that it was set in 1965. My generation!

Hell Yeah it should have been renewed it’s a great show I really hope that some how some way it’s put back to production!

I wish it would be renewed. I loved it!