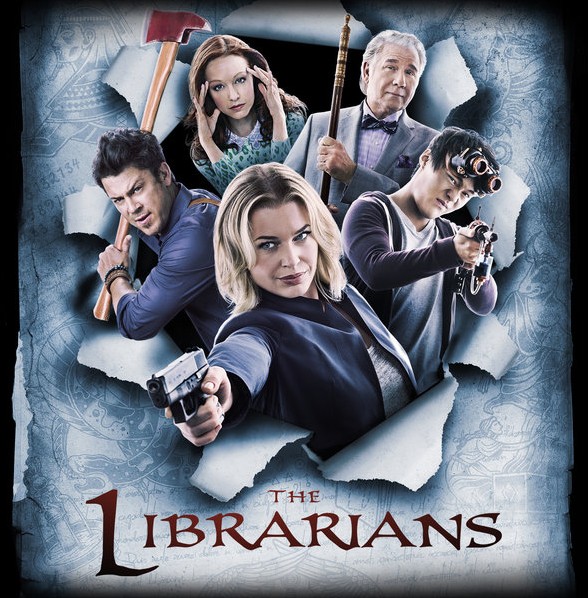 It’s back to the books — and the adventures — for the characters on The Librarians. TNT has renewed the adventure TV series for a third season.

The second season is currently airing on Sunday nights and is averaging a 0.53 rating in the 18-49 demographic with 2.08 million viewers (per the live + same day ratings). That’s way down when compared to the first season but it’s still one of the cable channel’s top scripted dramas.

TNT ordered 10 episodes for season two (there are two remaining) and there will be another 10 installments in season three. Viewers will have to wait until Fall 2016 to start watching them.

What do you think? Do you like The Librarians TV show on TNT. Are you glad that it was renewed or, do you think it should have been cancelled instead?

My husband and I both enjoy The Librarians series. It is one of the most creative shows on tv and we particularly enjoy the fact it is not violent, racist, sexist, and has non-offensive language.

Our whole family is delighted there will be a season 3!

yes very glad there will be a season three

yeah!!! My daughter and I both love this series…we watch it together. We were so excited to hear about the renewal

Was hoping The Librarians would be renewed. Never miss an episode. Love the Doctor Who nods in the season 2 finale. The T.A.R.D.I.S in the time machine room, and “taking the long way round.” Noah Wyle is the only American actor I would approve of playing the Doctor, because he would be incredible at it. And more Evil Cassandra! Lindy Booth is awesome at it! I hope more people start watching this!

You don’t have very high standards bad taste. It’s renewed only because TNT has a piece of it. It’s another Dallas. Cancel

Yes, I’m glad the Librarians is renewed. The cast gel together well and the topics are interesting such as a Warehouse 13 type show. Please keep it running at least the next several years.

Yay! I don’t understand how a web story from 12/22 can be updated on 12/15, but I guess it goes along with the time travel in the last episode of season 2.

The show is FUN. Yeah, sometimes I’d like something more thought-provoking, and it would be great if it caught fire in season 3. I think I’lloyds pay for couple more missed episodes. Money talks, yes?

i love this show. i just wish we could get more than 10 episodes a season

I love the librarians as well and am very happy they got renewed but sad about Agent X. I was really enjoying it. Too many negative comments on imdb about it did not help. I wish people would just comment on the shows they like and not bash shows they don’t. I will never understand that troll mentality. If I don’t like a show I would certainly never think to go to that page and start bashing it. That is such a waste of energy. There is no point to that. It is symptomatic as to what is wrong in… Read more »

It’s fantastic that The Librarians have been renewed. I am a bit sad though that Agent X got the axe.

I love this show. Renewing is a GREAT idea. I’m hoping for many more renewals in the future!! I’m not much of a TV watcher, but I never miss Librarians.

It’s such a bad show…& I love watching Christian. Kan but the show is so bad I can’t watch it. Why it was renewed I don’t know TNT must be desperate for shows

I love this show … and so do a whole bunch of other people so, “don’t mess with it” !

Love this show. So much fun to watch. Tired of everything revolving around 18 to 49 demographic. I am not within it, don’t have a nielson rating box and watch many of my favorite shows after they have aired on tv on demand.