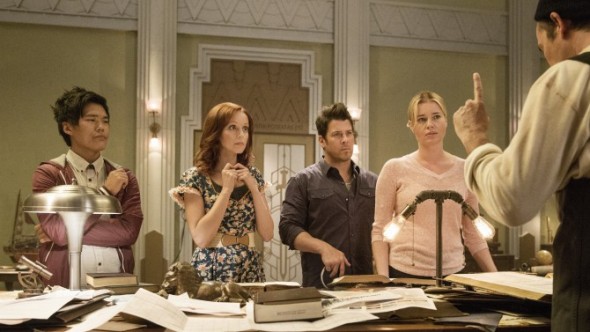 It’s back to the library for the characters on The Librarians. TNT has renewed their adventure series for a second season of 10 episodes.

TNT Opens the Book on a Second Season of The Librarians

TNT has renewed its hit fantasy-adventure The Librarians. One of the hottest new shows on cable, The Librarians burst onto the scene with a chart-topping launch in December and went on to finish the year as basic cable’s #2 new series of 2014, second only to TNT’s The Last Ship. The show’s success extends across TNT’s multiple platforms, with each week’s episode reaching an average of 11.4 million viewers through linear telecasts, DVR playback and VOD, digital and mobile viewing. TNT has ordered 10 episodes for the second season, which is slated to launch later this year.

Based on TNT’s hit movie franchise, The Librarians centers on an ancient organization hidden beneath the Metropolitan Public Library dedicated to protecting an unknowing world from the secret, magical reality hidden all around. Rebecca Romijn (X-Men), Christian Kane (TNT’s Leverage, Angel), Lindy Booth (Dawn of the Dead, The Philanthropist) and John Kim (Neighbors, The Pacific) star in the series as the newest protectors of the world’s mystical treasures, with Emmy® winner John Larroquette (Night Court, Deception) as their reluctant caretaker. Noah Wyle (Falling Skies, ER) recurs as Flynn Carsen, the role he played in TNT’s movie trilogy.

About Electric Entertainment
Founded by Dean Devlin, Electric Entertainment recently wrapped production on the Warner Bros. film Geostorm, Devlin’s feature directorial debut, which he is producing with Skydance Pictures’ David Ellison and Dana Goldberg and his Electric Entertainment team of Marc Roskin and Rachel Olschan. Devlin’s sales outfit, Electric Distribution, recently sold international rights to The Librarians to Universal International Television, and is selling international rights to a new untitled PBS Civil War historical drama, which is scheduled for a winter 2016 premiere. In addition, the company will also be co-financing and producing the film Go With Me starring Anthony Hopkins, Ray Liotta and Julia Stiles. Electric Distribution recently acquired international sales rights to award-winning SXSW titles Kelly & Cal, as well as the SXSW Audience Award winner Before I Disappear and the Terrence Malick-produced film The Better Angels. They are also selling the Sundance favorite God’s Pocket, a recent IFC Films release, which was the directing debut of Mad Men’s John Slattery and stars Philip Seymour Hoffman, John Turturro and Christina Hendricks and The Wannabe, which is executive produced by Martin Scorsese, Dean Devlin and Traction Media, and stars Patricia Arquette, Vincent Piazza and Michael Imperioli.

About TNT
TNT is television’s destination for drama. Seen in 101 million households and ranking among cable’s top networks, TNT is home to such original drama series as Rizzoli & Isles, Major Crimes, Falling Skies, The Last Ship, The Librarians, Murder in the First, Legends and Transporter The Series. TNT’s upcoming slate of original scripted dramas includes Public Morals, Proof and Agent X. TNT also features such dramatic unscripted series as Cold Justice, On the Menu and Wake Up Call. In addition, TNT is the cable home to popular dramas like Castle, Bones, Supernatural and Grimm; primetime specials, such as the Screen Actors Guild Awards®; blockbuster movies; and championship sports coverage, including the NBA and the NCAA Division I Men’s Basketball Championship.

What do you think? Do you like The Librarians TV show on TNT? Do you think it should have been renewed or cancelled instead?

Have really enjoyed this show and think they should bring it back. Not only is it exciting there is plenty of information contained throughout the series.

Cable cutters. Watch it on Hulu.

LUV the Librarians, absolutely. They need more publicity! It is unusual to have a literate show that’s fun and clever without blood and guts everywhere, I appreciate it. Keep it up.