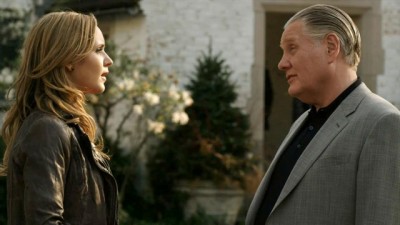 AS BEING PART OF THE CAST AND CREW OF THIS SHOW…. IT IS AN INCREDIBLE SCRIPT, WITH AN AMAZING CAST AND CREW….. IT GETS BETTER EVERY EPISODE AND IS 100% MORE INTERESTING THAN THE SHOWS THAT NETWORKS ACTUALLY KEEP ON THE AIR, THAT REQUIRE NO TALENT WHATSOEVER!

LOOK HOW MANY JOBS THIS SHOW PROVIDED IN CHICAGO FOX!!!

THERE IS NO REASON AT ALL THE SHOW WOULD NOT BE GIVEN SEVERAL MORE SEASONS! UNLESS IT IS POLITICAL REASONS IN FOX’S COMPANY…..HHHMMMM

I really really like this show, I wish the powers that be would reconsider their decision to cancel the Mob Doctor. Why not give it one more season and see if it doesn’t pick up…. I think it’s a lot of fun and truly different than the normal cop or hospital dramas. If it has to go, then the end should go something like this: Grace works with Franco to help him find a way back in so they can gather evidence against all the mob parties in Chicago so they can finally put an end to organized crime in… Read more »

Please dont cancel the show i love it and i look forward to watching it every monday please bring it bac.

PLEASE! PLEASE do NOT cancel the Mob Doctor… give it a chance and publicize it more… It is one of the best shows I’ve watched! We LOVE it! It is almost like watching the Soprano’s without the F bombs contantly! We love it!

I like the Mob Boss. Please keep it going.

I think The Mob Doctor is great. I hate to see it come to a end. The thing that gets me is you watch a show and you get interested in it and then they take it off. ABC is good for that.

You said it!!!!!!!!!!!!! Except the show is on FOX, not ABC. STILL ticked with ABC though, for axing my Soaps, AND now 666 Park Av! I’m SO sick & tired of investing in shows, only to have them yanked off the air! I lost count of how many shows I’ve lost just this season alone! I love The Mob Doctor also. Every time a show is axed, I think about all those umemployed actors & crews, and their families. It’s just SO sad! Gotta be a big blow to their egos also, because they’re all good actors, especially William Forsythe!

I enjoy the MOB DOCTOR but if the show cannot be saved, then have a good series finale to wrap it all up for my sanity’s sake. I’ll be watching the remainder episodes…you can count on that!

All over the web you get these damn spam comments disguised as genuine comments all praising this stupid DISH hiphop, I will tell you this DISH grass hopper sucks, do not use it!! all your recordings will be lost!!!!!

They are quite annoying which is why I typically delete them or edit out the spammy part. I missed this one so thanks for bringing it to my attention.

I’ve had mixed emotions for The Mob Doctor. I know plenty of my friends that work with me liked Spiro in My Boys, but we think that her role her isn’t quite the right fit. Cheers to the remaining episodes; I’m sure FOX will bounce back with something worth watching.

[…] UPDATE: FOX will finish airing the 13 episodes in late December and early January. They haven’t ordere… […]