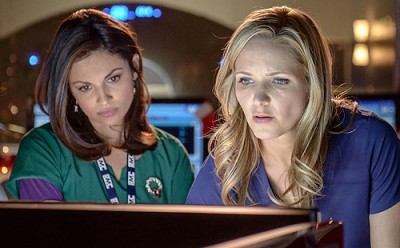 Not surprisingly, FOX opted not to order any additional episodes of The Mob Doctor, essentially cancelling the low-rated series. The network seems committed to airing all 13 episodes however and has just released a description of the final installment. Hopefully, it will offer fans some closure.

Grace’s world crumbles as her family remains in jeopardy, the FBI closes in and Constantine reveals something that rocks her to the core. Meanwhile, longtime mobster Al Trapani (Mike Starr) becomes increasingly involved in Constantine’s business, and Franco’s secret leaks. As the walls begin to close in on Grace and the duality of her life cuts deeper than ever before, she makes a desperate attempt to settle her role in both worlds in the all-new “Life and Death” season finale episode of THE MOB DOCTOR airing Monday, Jan. 7 (9:01-10:00 PM ET/PT) on FOX. (MOB-113) (TV-14 D, L, S, V)

What do you think? Do you think this episode will wrap up the series or leave viewers unhappy?

Upset this show was cancelled, I really enjoyed. Bummer…

omg Alcratraz, Park Avenue 666 and now Mob Doctor. Someone has it wrong…..

why do the networks always cut great shows!!! I always looked forward to my MOB hour
now what??

really ticks me off when as soon as a good show airs and you get right into it – the damn networks axe them!!!

definitely not happy about this!!!! this was the best show so far on television for a long time!!!! dammm i cant believe this I’m so mad!!!!

Finally…something to watch besides “reality shows” and set-up competitions between who- knows- who for who- knows- what…..Bad move on Fox’s part to cancel. This exciting program should get picked up by another network that DESERVES it!

Really enjoyed the show. Well written and action packed. With so many tv shows that aren’t worth watching can’t believe they would cancel this one. Everyone is not young and some of us older people like shows with substance

Love love loved this show.! Extremely disappointed fox cancelled the show. Bad mistake on their part. It was definitely a fresh show compared to others. Hopefully it does get picked up by another network!!!!

I really liked the show. I can’t believe they would cancel it. I also hope someone will pick it up. Great story line.

I really like the show too bad it get cancelled and some of the junk shows get renewed.

If fox had scheduled it another night it probably would have done better.

Good group of actor and story line, maybe a cable network will pick it up.

What a shame that a new show with this storyline had to be cancelled. Too many cop shows with the same theme leave me hungry for something different. The Mob Doctor had a new theme and exciting story that kept me coming back week after week. Shame on you Fox for cancelling this riveting show.

I agree that good shows get cancelled. I think the Mob Doctor had a good storyline. I hope mother network picks up the storyline. Left us hanging. Unbelievable.