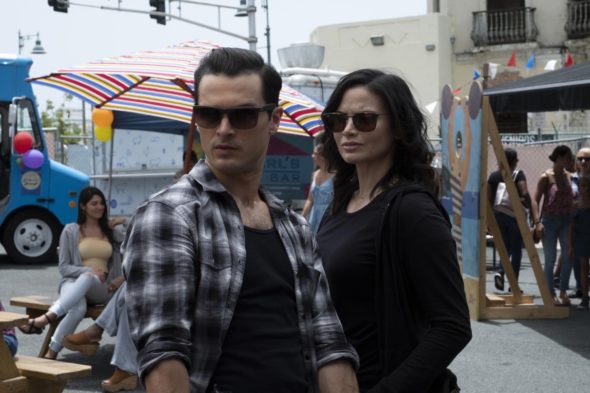 Is Steve Hammond still in control of The Ravens? Has The Oath TV show been cancelled or renewed for a third season on Crackle? The television vulture is watching all the latest cancellation and renewal news, so this page is the place to track the status of The Oath, season three. Bookmark it, or subscribe for the latest updates. Remember, the television vulture is watching your shows. Are you?

Will Sony Crackle cancel or renew The Oath for season three? Crackle tracks its own viewership, it is difficult to predict, since we don’t know what kind of traction the show is getting. Flying blind, I predict a renewal, but that isn’t even speculation, just the hungry opinion of an empty gut. I’ll keep an eye on the trades and press releases and update this page with any developments. Subscribe for alerts regarding The Oath cancellation and renewal news.

What do you think? Should The Oath TV show have been renewed for a third season?

Oh how I wish you would bring The Oath back for a season 3. That is one exciting, fast moving tv series. I never got bored with any of it, there was no slow parts in it. Terrific show.

It should be renewed, great series

While I REALLY like this show A LOT, Hammond is in prison, Most of the Ravens are dead or critically injured, Cartel is headed WAY out of town, The club has been shot to hell, And it would seem they have no friends left. Where would season 3 even go? I’m calling limited run. The last episode seemed like a wrap to me. I feel like it is one of those shows that needs to be left alone. But, I could be wrong. Would hate for it to be ruined with a bad season 3 follow up, only to be… Read more »