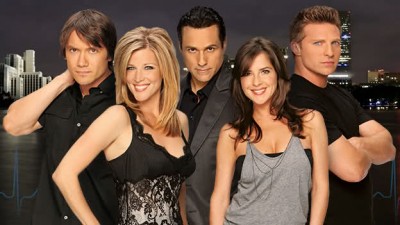 ABC has cancelled one daytime series and renewed two others. Fans of General Hospital can breathe easy, at least for a little while.

The network has confirmed that The Revolution, their ratings-challenged talk show, will go off the air on July 6th. The TV series debuted in January and took the place of One Life to Live. Hosted by Tim Gunn, Harley Pasternak, Ty Pennington, Jennifer Ashton, and Tiffanie Davis, The Revolution has been a ratings disappointment and has been averaging about 1.3 million viewers according to Deadline.

Meanwhile, both General Hospital and The Chew have been renewed for the 2012-13 season. While General Hospital’s viewer numbers have come down over the years, the ratings have shown signs of improvement. In late March, GH averaged 2.3 million viewers while The Chew drew 2.2 million. The Revolution pulled in just 1.3 million.

Katie Couric’s new talk show, Katie, is slated to premiere on September 10th and will air at 3pm on most stations. Until that happens, ABC will fill the timeslot with an hour-long afternoon version of Good Morning America, tentatively titled GMA in the Afternoon.

While the alphabet network hasn’t said as much, they are obviously still searching for low-cost programming to fill their daytime hours. While the renewal of General Hospital has ensured that the venerable soap opera will reach its 50th anniversary — on April 1, 2013 — there’s certainly no guarantees beyond that.

What do you think? Did ABC make the right decision to renew General Hospital? Do you think it will reach its 51st year?

I would be very disappointed if GH was cancelled. I love the inclusion of OTL characters but really wish they would bring the show back, along with AMC. I love ABC but would boycott the network if they cancelled this last soap.

I hope you don’t make another mistake by taking GH off the air. I have watched it ever since I can remember with my mom. I don’t care for The Chew as I think there are plenty of food shows on tv now. I try to eat healthy and don’t think The Chew is that kind of show. I have watch and like two othe ABC shows that were taken off the air What about Brian and Brothers and Sisters). Take GH off and I won’t be watching your station again.

I started watching General Hospital with at the age of 9, with my mother. I hope to watch it another 50 years. “>)

I enjoyed The Revolution, I have watched General Hospital for 40 years plus and still continue to watch it. I don’t care for the Chew, and I don’t think the Katie Couric show will be successful.. I didn’t care to watch her when she was on the other station in the morning or at night. She just doesn’t seem real…..Robin Roberts is “Real” she would have been a great person to have her own show. I watch GMA because of Robin, Sam, Josh and Lara, George would be better off back doing what ever he did before. I think the… Read more »

so my “stories” have been on anywhere from 40-50 years and these other shows are already being canceled? hmmmmm

Revolution was boring. Please bring One Life to Live back!!!!!!!!!

I loved watching the Revolution at 11:00am I hate the Talk. The Revolution had such a variety of subjects and did have the variety of host and co-host you didn’t loose interest.Sorry the network just looks at numbers and not the show times it’s competing against.All the best to some great people!

I am sorry to see the Revolution go.

With all the focus on weight and health this show was a wonderful way to show people what a few changes in their lives could accomplish.

Why do all things have to come to an end? There is a good reason why general hospital has lasted as long as it has. Of course the reason is so obvious that it doesn’t even need to be said. Is it going to be like the old western shows that everyone use to love that will forever be gone. I have also watched it from the beginning and out of every show on tv it is the only one I get upset about if I miss it I really hope it last longer than just through the 2012-2013 season.… Read more »

I enjoyed The Revolution…..sorry it’s off. Enough gossipy info shows.

I am glad GH wasn’t cancelled. I’ve been watching it since it began. There is an entire generation over 65 who literally go home so they can watch it at 3:00pm. My mother is one of those folks. I’ve also enjoyed seeing the characters from All My Children on GH. I think it would be a big mistake for General Hospital to go away. I feel the novelty of ‘reality’ type shows has long past. I hear this from the 25-40 age bracket often. I know they are inexpensive to produce and not all of them are stupid but I… Read more »

opps, I was wrong on the characters from AMC showing up on GH. They’re from One Life To Live. Sorry for the blunder.

Thank Goodness you got rid of the revolution. It was a rediculous show! There were so many shows so much better on the air that tackled the same discussions they did and it is done in such a better way on those shows. General Hospital with the inception of the characters from One life to Live was a genious move. It made the show so much more interesting now and I love it. The chew is one of the best shows on TV. The cast gels together very well and the food they cook is wonderful. Love it!!!!! thank you… Read more »

I am very disappointed that The Revolution was cancelled. It had great weight loss tips and seeing how much people lost was very inspiring. Soap operas are so passe I think they should do away with them all. Nobody under the age of 30 watches them. I stopped watching them as did all my friends 10 years ago.

Have you taken a conses of the age group that watches General Hospital ????? You may be very surprised that you are so wrong!!!!!! It always has a story line which includes all generations. Bulimiaa obesity, teenage pregnancy, etc. You might learn something if you try watching it!
. Also if you want to get tips on loosing weight! Try watching, the biggest loser, Dr. Oz, the chew, or any other morning and afternoon programs that tackle it every single day in a better way!

So disappointed to find out The Revolution has been canceled. It was a truly inspiring show. I have learned a lot from each and everyone of the cohosts. I DVR the show daily, and tell anyone and everyone about what I have learned. I will truly miss this show.

Well you stand quite alone on your opinion! It was canceled because it was boring, uninspiring and a waste of time when there are so many other shows that tackled the same thing in such better ways with so many better hosts!!!!! Those people just didn’t gel together ! The proof is in the result, it was canceled!!!!!

Please leave General Hospital on the air!! And instead of
bringing on another boring talkshow bring back All
My Children and One Life to Live!!! I haven’t talked to one person
that watches those ridiculously boring shows that replaced
the other 2 soaps and if General Hospital is cancelled ABC
should just give up because they will have no ratings for daytime at all.

general hospital better not be cancelled!! daytime really sucks anymore with stupid cooking/talk shows. they should have never cancelled all my children and one life to live either!!!!!