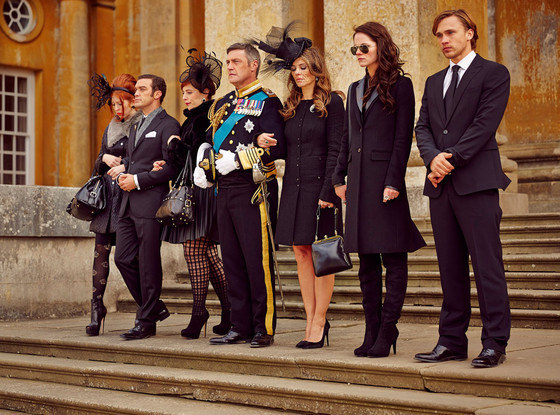 E! has announced that they’ve renewed their original drama — The Royals — for a second season. The first season won’t debut until March 15th at 10pm.

Los Angeles, CA, January 15, 2015 – E! Entertainment today announced the second season pick-up of the network’s first original scripted series, “The Royals,” in advance of its first season premiere on Sunday, March 15 at 10pm ET/PT. Created by Mark Schwahn, the hour-long drama centered on a fictional modern day royal family features a distinguished cast that includes Elizabeth Hurley and Vincent Regan as Queen Helena and King Simon, along with William Moseley and Alexandra Park as their devious and scandalous royal twins Prince Liam and Princess Eleanor. “The Royals” is a co-production of Lionsgate and Universal Cable Productions and will begin production on season two this spring in London.

“To renew this freshman series before its highly anticipated first season premiere underscores E!’s commitment to the scripted genre and our confidence and support of this groundbreaking and rule-breaking original series,” said Jeff Olde, Executive Vice President, Original Programming & Development, E! “We’re thrilled to have Universal Cable Productions joining Lionsgate as a co-producing partner as we announce a second season pick-up for this scandalously fun series.’”

“Lionsgate has been a great partner throughout the years, and they really delivered for us with ‘The Royals.’ We’re excited to be working with Jon Feltheimer, Kevin Beggs and their strong creative and production teams on this regal and excellent show,” said Jeff Wachtel, President and Chief Content Officer, NBCUniversal Cable Entertainment.

“We’re very proud that E! chose ‘The Royals’ as its first original scripted series and delighted about this early season two pick-up,” said Kevin Beggs, Chairman, Lionsgate Television Group. “The cast and creative team are exceptional and E! has been a tremendous partner in supporting the creative direction of the series from day one.”

Love, hate, lust and revenge are taken to a delightfully decadent new level in this 60-minute drama series that goes inside a world where power is everything, limits do not exist, and trust is a luxury that no one can afford. Season two will go even deeper behind the pomp and ceremony where scandal continues to lurk, and all is fair in love and royalty.

What do you think? Are you looking forward to watching this show? Are you more likely to give it a try, knowing that it’s already been renewed for a second season?

is there going to be a season 2 i sure hope so, i just loved watching it,

i had enjoyed watching the royals and am disappointed that it is not one anymore. it was one of your better series.

i got so caught up with the royals tv series , it kept me guessing after each show. i really will miss seeing it. they should not have cancelled it.

I absolutely LOVE this show. I cannot wait for season two. Brilliantly written script and excellent acting even when it’s over the top. I look forward to many seasons of watching this series unfold. Thank you, thank you for giving your viewers something new and out of the box to look forward to every week.

AMAZING SHOW! It is the show I look the most forward to watching each week. It is fresh, fun and the actors are delightfully over the top. Bravo E!

I love this show, It’s the only show all week I look forward to…I can’t wait to see whats in store for season 2.

Absolutely addicted!!! Just watched the finale and cannot wait until season 2 I hope that Cyrus ******* gets knocked off the throne within the first two seconds!!!

I found this show by accident, it is my favorite. The good characters you love and the bad are the worst. I love it, I went back and watched every show, it is the best.

I love this show. A wicked bunch of characters, specially the King’s creepy brother, who I hope gets his just desserts along with The Queen and soon! Loads of sex and debauchery! Can’t wait to see what they come up with for Season 2! Are Liam and his sister really ********??