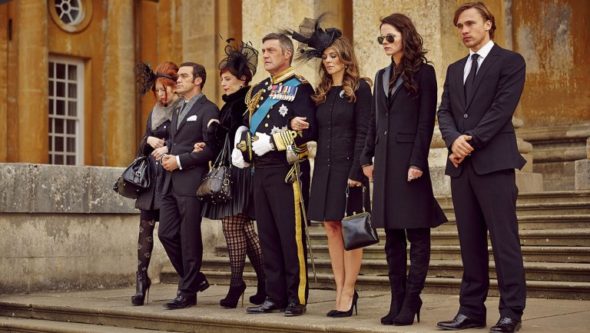 Is The Royals headed for cancellation? According to The Hollywood Reporter, the E! series creator Mark Schwahn has been fired amid allegations of sexual harassment.

The scripted drama revolves around a fictional British royal family in modern day London. They inhabit a world of opulence that caters to their every desire, but one that also comes with a price tag of duty, destiny, and intense public scrutiny. The cast includes Elizabeth Hurley, William Moseley, Alexandra Park, Jake Maskall, Tom Austen, Max Brown, and Jules Knight.

Production has wrapped on season four of The Royals, but it’s unclear if it will be the last for the E! series following Schwahn’s termination.

We have concluded our investigation and Mark will not be returning to The Royals. The fourth season of the show has already completed production and will air as scheduled on E! in the spring.”

What do you think? Do you watch The Royals? Do you think season four should be the last?

PLEASE BRING BACK HE ROYALS, IT’S MY FAVORITE SHOW. YOU CAN’T STOP AFTER THE ENDING OF SEASON 4

The Royals is my favorite show of the last decade.

I love this show. Please don’t cancel it

No way get another station to take the show on SOS. Save Our Show. People our there start bugging them to keep in on. And off some those show that are great THE ROYALS are the best.