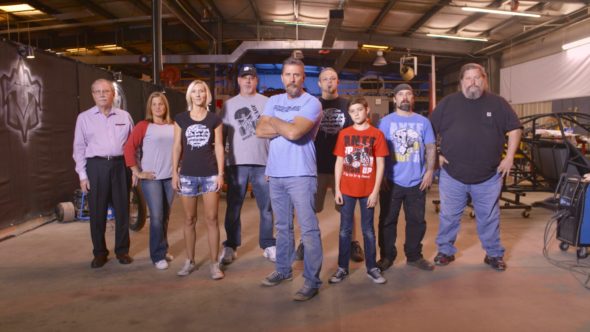 ToyMakerz is back in action! It was just announced season three of the History and FYI TV show will debut in February.

The docuseries follows “ToyMaker” David Ankin and his team as they craft “one-of-a-kind custom automotive builds.”

Season three of ToyMakerz debuts on History and FYI in February. An exact date has not yet been released.

REIDSVILLE, NC – (December 18th, 2018) – “ToyMakerz” is set to premier a third action-packed season this February on HISTORY® and FYI®. Each week, former celebrity stuntman and head “ToyMaker” David Ankin leads his talented team in crafting one-of-a-kind custom automotive builds. From hot rods and classics to muscle cars, trucks and motorcycles, “ToyMakerz” gives car lovers across America a front-row seat to the incredible process behind building these powerful and unique machines.

“ToyMakerz” third season promises 8 episodes of high-octane thrills. Prepare to be blown away as the team hits the Capital City Bikefest and Car Show and takes on never-before-seen projects, like building a 4-foot racing drone to compete in the ‘Misfit Toys’ episode where fans were even invited to race! Watch as Ankin challenges friends, fans and associates to a “Misfit Toys” invitational, competing for custom-build bragging rights, and gives an old-school hot rod a powerful and unexpected update. Catch an special guest appearance by NASCAR legend Richard Petty, and strap in for the wildest season finale yet, featuring a twin-seat, front-engine radical dragster powerful enough for the track, yet perfectly street legal.

“We couldn’t be more excited about the new season of ‘Toymakerz.’  We have been creating several specialty vehicles that people are going to not only enjoy, but never forget,” says Ankin. “We have a real feel for the types of big engine toys that people like to see and we’re ready to tackle those projects from the ground up. It’s going to be an exciting season of builds for sure…some of the fastest, and most unique, cars and motorcycles ever made, and then driven to the extreme!”

The action-packed third season of ToyMakerz kicks off this February on HISTORY, with encore presentations on FYI.  Fans will be able to catch up on past episodes at HISTORY.com as well as Amazon On-Demand and iTunes. Check out the show’s interactive app powered by Source Digital, and find more information about ToyMakerz at: www.toymakerz.com.”

What do you think? Have you seen ToyMakerz? Will you watch the new season?