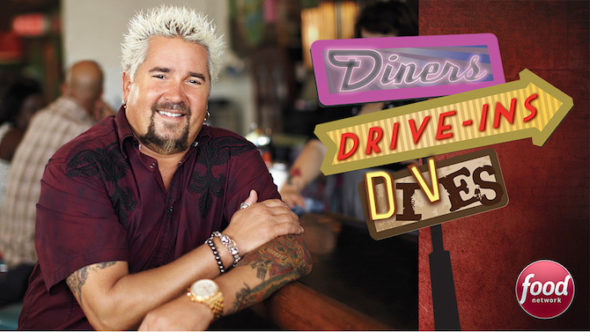 The food travel show follows Fieri as he “checks in on some of the most memorable joints he has previously visited to see how they have been doing, and to get a taste of some of the new and classic recipes they are dishing out.”

New York – July 2, 2018 – For the first time Guy Fieri is heading back to some of his all-time favorite Diners, Drive-ins and Dives spots on new series Triple D Nation, beginning on Friday, July 13th at 9pm ET/PT. On this all-new spin on DDD, Guy checks in on some of the most memorable joints he has previously visited to see how they have been doing, and to get a taste of some of the new and classic recipes they are dishing out. Whether they have opened new locations, expanded their old ones, or added to their menus, these restaurants are always pushing the boundaries of their culinary comfort zone.

“Triple D has had an incredible impact on so many of the businesses featured on the show, and for years restaurant owners have invited Guy back to see all the incredible and delicious changes they’ve made. Now, Guy is taking viewers back for a second serving to catch up with old friends and to experience all the new things they are offering,” said Allison Page, President, Food Network and HGTV.

It’s a walk down memory lane in each episode as Guy showcases four of his favorite spots to catch up with his chef buddies he’s met along the way and see what they have been up to since they last appeared on DDD. From breakfast, lunch and dinner, to sandwiches, snacks and seafood, and to flavors from near and far, it’s the best-of-the-best of Flavortown.

On the premiere, Guy finds things have changed a lot for his poke buddies at Big & Littles in Chicago. In Denver, it’s a second serving at a unique ‘triple threat’ location that is part bar, part pizzeria and part biscuit shop, where they are dishing out breakfast biscuit sandwiches and a couple of new late-night Italian options. Over at The Shanty, in Wadsworth, IL, the owner reminisces about how DDD changed his life and his menu with new dishes, including braised pork shanks and goat cheese wontons. Finally, in Seattle, a return to Diners, Drive-Ins and Dives first, and only, Trinidadian joint reveals their new take on an old staple – fry bread.

Fan can go behind-the-scenes with Guy, check out full recipes and scan the best diners, drive-ins and dives across the country on FoodNetwork.com/DDD. They can also hop along for the ride on Twitter with #DDD.”

What do you think? Are you a fan of Guy Fieri? Will you watch Triple D Nation?

When you visit Savannah drive 50 miles south to Townsend Ga, “the old school diner” with chef Jerome. Carpeted parking lot will start it off. Great food

Guy, if you are still checking out places for DDD you should come up to Northern Michigan in the summer and check out places in Charlevoix, Boyne City and East Jordan, petoskey, Gaylord, traverse city. All kinds of places with good food. You could do a whole season worth of shows in this area.
Thank You and have a Flavorful Day.

Guy we have a home town diner that you will love. it’s called jiffy burger here in Manchester TN. it’s a staple here and amazing. The only place we enjoy going to. The ppl there are down to earth, food is incredible, and cheap enough for everyone to enjoy. We watch your show every morning while we eat breakfast so I thought I’d tell you about our favorite place. Maybe you could visit it.

Ready to take a tour of all the amazing eateries guy has found!!!! He needs to visit safety harbor ,fl Gigglewaters and Frenchys Restaurants in Clearwater Beach , fl. The Beach that has been in the top 10 in the world!!!

How do I get in touch for you to check out a diner in Fallston NC? You definitely will not be disappointed.

How do I nominate a diner/dive restaurant for you to come look at? In Arlington, Washington?