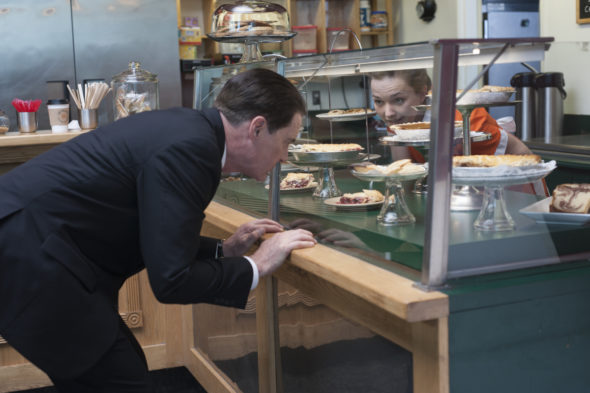 Will Twin Peaks TV show be cancelled or renewed for season four on Showtime? Deadline reports Showtime president and CEO David Nevins said, “It was always intended to be one season. A lot of people are speculating but there’s been zero contemplation, zero discussions other than fans asking me about it.” According to the report, Nevins made the remarks during Showtimes TCA summer press tour party.

That said, “the door’s always open to David Lynch, whether that would lead to another season, I don’t know if he wants to do it,” said Showtime programming president Gary Levine, who was ABC’s executive on the original Twin Peaks series and played a key role in bringing the revival to Showtime. “This was a Herculean effort. I’m not sure if any director has ever done 18 hours in a row of a series… It’s remarkable what he achieved, fans are liking it and for me that’s what’s satisfying.”

The 18-episode Twin Peaks sequel, which had a rocky three-year road to the small screen, was written by the original series’ creators Lynch and Mark Frost and entirely directed by Lynch, with Kyle MacLachlan reprising his role. It has been a modest linear ratings performer but has driven record Showtime streaming sign-ups.

Twin Peaks: A Look at the Ratings

In the third season of Twin Peaks the initial airings are averaging a 0.10 rating in the 18-49 demographic and 294,000 viewers. Compared to other Showtime TV shows, it currently ranks 10th or 11th, depending on how we sort the numbers.

What do you think? Have you been watching the Twin Peaks TV series revival. Is it ending at the right time? Would you have watched a fourth season, had it been renewed? Let us know, below.

in real life i hate roller-coasters but david lynch’s head trip coaster rides are a different matter; i love/hate/love twin peaks. i’ll admit a 25 year wait between seasons 2&3 was a drag but at least the promise, (implied/inferred), was kept. yeah, i had too high/ too low expectations. the first 2 episodes and dougie’s way too slow recovery were infuriatingly frustrating painfully slow pace, ok d.l. you get ‘poetic license’, you’re worth it. the casting acting, direction, creativity and trippy, metaphysical uniqueness, (my favorite part), make up for any frustrations. another commenter said cooper should be twin peaks sheriff;… Read more »

I am addicted to Twin Peaks, just watched the season three finale and a few minutes later i am already experiencing severe withdrawal symptoms 🙁

Twin peaks is in my ‘list’ of best shows i have ever experienced! 🙂
Here’s my ‘list’; Twin Peaks and Lost

I think there are still too many loose ends and unanswered questions lingering in the minds of most viewers who watched this show with the intent of making sense of it. That is, unless I’m (we’re) just too dense or narrow-minded to “get it.” Who was the girl who swallowed that bug-like creature and what became of her? Who were those filthy men that were helping/reviving the Cooper doppelganger and what did that cryptic message by that one who took over the radio station mean? What happened to Audrey Horne when she disappeared? And there’s more…a lot more dangling threads.… Read more »

the message may have been a spell that mesmerized people like when the girl fell over and was invaded by the atomic mutant bug.

I actually meditated on that one night and ended up going into a waking trance that lasted all night, thought I think I did fall asleep maybe a couple of hours before daylight.

I loved the 1990s version – but the 2017 version is hard to watch. I didnt get it from the first episode. I also got tired of watching coop acting like a 4 year old.

I think it’s been the best series since breaking bad. Coop just woke up so I assume he has to get Mr c back to the red Room and get Dougie Jones out.. in 2 episodes that will be tight. Maybe another film would sort it all out and hopefully coop becomes sheriff of twin peaks

How about global views 🙂 If the network doesnt want to do it… maybe Netflix does…
With only 3 more episodes to g, i can hardly believe this will be a true ending to the show 🙁

I would prefer HBO, but Netflix would be okay, I guess.

Hands down the best television since The Prisoner. Like nothing else on television at the moment. I can’t remember looking forward so much to the next episode of anything. I subscribe to NowTv, in the U.K. Just so I can watch it on Sky Atlantic’s catch-up service.

This is hands down one of the best shows ever made. The weirdness is so wonderful, the soundtrack, the underworld, space, quirky ideas like Mr. Jackpots and traveling through electrical outlets, the questions about dreams and “reality,” the prophetic log lady, light shows, adherence to intuition … there’s nothing else like it. And yes, yes, yes, please make a fourth season David Lynch!!!

Look, I don’t for a second think that Lynch will ever deliver a closer for the show that makes any sense. That said, it’s still wonderful to watch–odd, weird, irritating, patience-testing, slowly paced–there’s just nothing like it, and I love it even while admitting that it will never make a lick of sense. I say, so what? We knew that when the original aired. If you came into the new version with those expectations then of course you’re going to be disappointed. I’m just happy that Lynch kept everything from the original and the movie and didn’t recast or alter… Read more »

I would be completely onboard with a fourth season, especially if David Lynch were to personally direct every episode. The only other director whose work I’ve watched that is able to figuratively stop time for me and keep me glued to my screen watching his narrative unfold was the Russian director, Andrei Tarkovsky. If Showtime can convince Mr. Lynch to continue Twin Peaks, then it would allow one of our greatest American treasures to further enrich his already outstanding body of work.

Far too many people claim this is a thinking show, under the mistaken premise that Lynch actually has a plan for it. They cannot even contemplate the obvious truth, that this is just another LOST-style mystery box, that is pretending there are answers. Why else would season three have so little development throughout the first 10+ epsiodes? Not to mention the over-the-top characterizations, and lack of actual Twin Peaks involvement in the show. This should be taken away from Lynch, and handed to someone that is far less random in their ability to produce.

I love it! While it is starting to get a little old watching Dougie wake up, I think there will be a moment when it all comes together. I loved the original series, and watched it when it was originally on back in the 90’s, and rewatched it several times when it became available on Showtime, both streaming and demand. The Return is typical Lynch, and so much better than most of the junk that is on TV that calls itself entertainment. Sure it’s entertainment if you’re a non-thinking drone. This keeps you thinking.

Thank God! Love Twin Peaks but the Return is horrible!

I loved the two first seasons of Twin Peaks, but this “Return” got very interesting ideas, but enduring an amnesiac Agent Cooper for so many episodes got me tired of the show and disappointed. I has high hopes for the Season 3 and they are gone. I guess David Lynch got too much freedom. I like his style, I watched and have all his movies, but I think the audience wanted Dale Cooper at Twin Peaks investigating and didn’t got it.

This show is amazing and I really hope there will be a fourth season!!!