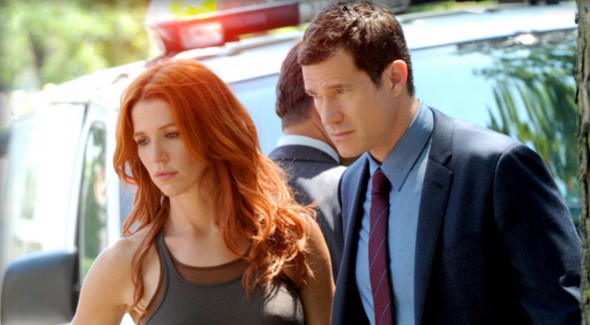 Unforgettable seems to be one of those shows that just won’t stay cancelled. Deadline is reporting that A&E is finalizing a deal to save the twice-cancelled series from the grim reaper with a fourth season of 13 episodes.

The series was cancelled (for the second time) the series quite awhile ago but Sony has been working to find a new home for the crime drama.

The contracts with the cast have all expired but at least Poppy Montgomery and Dylan Walsh are expected to be back. No word yet on the other castmembers. Series creators John Bellucci and Ed Redlich (as executive producers) will return along with Sarah Timberman and Carl Beverly.

Unforgettable did skew older on CBS so the pick-up by A&E does seems like a bit of a surprise since they cancelled Longmire for attracting an older audience. The difference between the two is said to be the licensing fees.

Both are produced by outside studios. Longmire was quite expensive for the cable channel (they supposedly lost money on the deal) while Unforgettable is not. The latter does quite well internationally which has allowed Sony to keep the fees down and profitable.

Sony has a history of fighting to keep cancelled shows alive and has found new homes for Community, Damages, and Drop Dead Diva.

No word on when the fourth season of Unforgettable will be produced but an official announcement is expected once the deal is sealed.

What do you think? Are you glad that Unforgettable is being revived again? Will you be watching season four?

I am glad my got renewed. I would like to know when the show will start and time. I have been waiting for a time and day . Could you email. Me at a day and time for the show? Very very excited it’s been treed.

I’m with you Barbara Gist! I hope they don’t cancel it either. I can’t wait for it to be back on. There is a dynamic between the cast that just makes you feel like you are part of the “family”. Besides, they have to eventually let us know who killed her sister. Pretty much what the whole show has been based on. I could do with another 20 seasons of it at least! 🙂

Great show. Please bring it back. I only seen the last show. I would like to see the re runs.

Robert, if you want to see all the others, go on http://www.couchtuner.la/watch-unforgettable-online/ and you can see all of the first 3 seasons! 🙂

I am glad that unforgettable is being saved so that way we can still enjoy all the new seasons that they come outwit and the old ones to.

I am glad unforgetable has a new home, will for sure be watching it.

WHEN WILL NEW SHOWS COMING OUT CAN’T WAIT. AWESOME SHOW.

Happy to see this one back. great show, great cast and storyline.

We love the series and hope it will be brought back!!!

Glad and THANK YOU A&E .. can you pick up Forever and a few other good shows being canceled too. A&E could then be the leading network watched for keeping good shows! Can’t wait for the season to start … LOVE this show. Thanks!!!!

Yes I want it back I like this show very much please don’t cancel it. It is very entertaining.

THANK YOU SOOOOOO MUCH A&E !!!! You are a great channel and you know good shows when you see them!!! THANK YOU,THANK YOU, THANK YOU !!! Keep up the great work !!!

So ecstatic that Unforgettable is to be brought “alive” again! Thank you so much A&E.

Very happy to hear that Unforgettable will be revived on A&E! I will subscribe to A&E just to watch it.