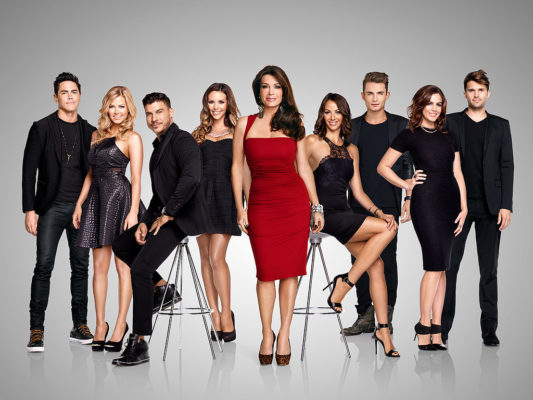 Are you ready for the new season of Vanderpump Rules? Bravo just announced season seven will premiere alongside the new TV show Unanchored in December.

A docuseries, Unanchored follows “nine best friends aboard a 56-foot catamaran for three weeks in the Bahama.” The series debuts on Bravo on December 3rd at 10 p.m. ET/PT, right after the season seven premiere of Vanderpump Rules at 9 p.m ET/PT.

Read more info from Bravo below:

NEW YORK – October 31, 2018 – Bravo Media delivers double the drama and twice the fun with the season seven premiere of “Vanderpump Rules,” immediately followed by the series premiere of the new docuseries “Unanchored,” on Monday, December 3 at 9pm & 10pm ET/PT. Following nine best friends aboard a 56-foot catamaran for three weeks in the Bahamas, “Unanchored” will air new episodes on back-to-back nights every Monday and Tuesday at 10PM ET/PT.

This season of “Vanderpump Rules” kicks off with the anticipated opening of TomTom. Lisa Vanderpump channels her energy into making sure her newest venture is the epitome of perfection, but when last-minute problems arise, she must assign more responsibility to her junior partners Tom Schwartz and Tom Sandoval – whether they’re ready or not. After a rollercoaster of a year, Jax finally proposes to his loving girlfriend, Brittany. Although they appear to be getting along better than ever, Brittany breaks down when the group questions Jax’s motives. After a painful breakup, Stassi bounces back with an exciting new business deal, an eccentric new boyfriend, and a surprising friendship with Ariana. Meanwhile, Tom Sandoval is on the brink of the greatest success of his professional life, but his personal life remains complicated when he shares an intimate secret about Ariana. After being the target of body-shaming comments, Katie takes a stand for the women of SUR and delivers an ultimatum to Lisa that sends reverberations throughout the entire restaurant. Normally fun and light-hearted, Lala struggles with the sudden death of her father leaving everyone wondering if she’ll ever be the same. Fresh on the heels of her breakup with Rob, Scheana declares this to be her “single summer” but when she starts a new obsession over a hot SUR barback, people whisper that Scheana hasn’t changed as much as she claims. Still the resident DJ, James stirs up trouble when an ill-conceived rap lands him in hot water with the group. Kristen retaliates by unleashing an explosive rumor about James setting off an irrevocable chain of events that will affect the entire SUR family.

Adventure sets sail on the new series “Unanchored” as it follows best-friends Barrett Young, Chelsi Pugliese, Danielle McNeil, Evan Tauber, Korey Warzala, Max Craddock, Rachel McGowan and Vanessa Cavanaugh as they embark on a life-changing journey filled with wanderlust and self-discovery. Led by their larger-than-life skipper, Captain Jack Royds, the crew attend one of the most coveted and exclusive “floating festivals,” called “The BucketLust” where 350 people and 35 catamarans set sail to breath-taking locales throughout the Bahamas. On this annual trip, these friends jump in feet first by taking on all the work of the crew; from hoisting their own sails and tending the lines, to managing 100% of the cooking and cleaning. Every day brings a new stunning view and a thrilling excursion as they take dips with stingrays and swimming pigs, ride rocket-power jet boards and spend their nights partying until dawn. But it’s not always smooth sailing for this group, as friendships are put to the test, long-distance couples are forced to see if their romance can survive 24/7 togetherness and fiery exes try to coexist peacefully during their voyage. Between hidden jealousies and buried secrets, there’s no shortage of drama with these friends as pent-up conflict between the crew finally comes to a head. For these wanderlusters, everyday life is flat, uninspiring and tolerable for only one reason: it allows them to travel the world together and party in spectacular locations a few times per year.

The sixth season of “Vanderpump Rules” ranked among the Top 10 highest rated cable reality series in 1Q18 with P18-49 and delivered its best season ever in total viewers.

What do you think? Have you seen Vanderpump Rules? Will you check out Unanchored?