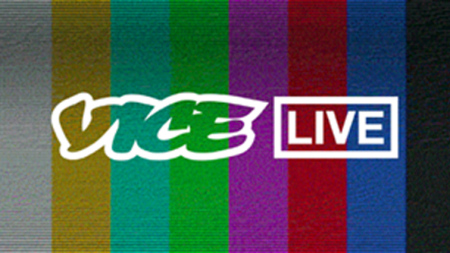 Vice Live is no longer. Variety reports Viceland has cancelled the TV show less than two months into its run.

For the past two months, ‘Vice Live’ has been doing it live from our Brooklyn HQ four nights a week with an unpredictable, beautifully crazy show that has showcased the best of Vice and shined a light on some of the hottest emerging talent in the worlds of comedy, music, television, and food. The show demonstrated the power and potential of One Vice and now we have added to our world-class production capabilities in Vice HQ, which can be used by any and all our Vice content teams.”

What do you think? Did you ever watch Vice Live? Are you sad it’s cancelled?

I loved the show especially Marie and Zack I thought their chemistry was great. They need their own show

I really liked it MINUS Sandy Hoenig. The absolute most unfunny, untalented, extremely ackward individual I have ever witnessed on television. I worked on two of the biggest shows on regular television (NBC and CBS). I have to wonder how she got cast. Were these people tested prior to air because there was zero chemistry. Marie Faust was too loud and opinionated for the other cohosts. Also, two hours was a mistake from the get go. Get one hour right before making it more. The concept had lots of potential but failed in the execution.

Heard about but never tuned in to watch. I always thought the concept of the show sounded interesting. But I think one of my favorite shows was on at the same time.