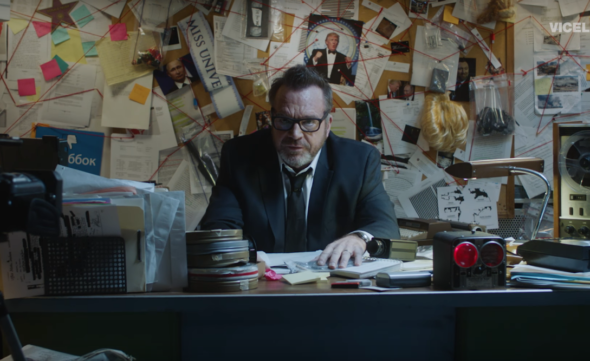 Tom Arnold is on the case. This week, Viceland announced they’ve ordered a new TV show called The Hunt for the Trump Tapes with Tom Arnold.

The series “follows Arnold as he uses his network of connections to search for the truth behind elusive recordings of Donald Trump.”

The Hunt for the Trump Tapes premieres later this year on VICELAND. Watch a preview and read more info below:

May 2, 2018, Brooklyn, NY – After the revelation of the Access Hollywood tape in October 2016 which featured reality show host turned presidential candidate…turned President Donald Trump making misogynist remarks, speculation ran rampant that other similar (or worse) tapes were “out there.” From Apprentice outtakes and Miss Universe footage all the way to the infamous “Russian Dossier” tape. Through it all, one determined man has contended that not only these tapes exist, but they need to be seen and heard.

That man is actor-comedian Tom Arnold, who is taking his activism off Twitter and putting it into real life.

VICELAND begins production on a new series THE HUNT FOR THE TRUMP TAPES with TOM ARNOLD today with Arnold’s announcement on SIRIUS XM’s The Howard Stern Show, where hours of Trump interview tapes also reside.

The eight-episode series, which will premiere later this year, follows Arnold as he uses his network of connections to search for the truth behind these elusive recordings of Donald Trump. Along the way, Arnold will look into the network of powerful people and companies who have kept these revelatory and potentially damaging recordings under lock-and-key.

While serious in its intent, featuring veteran journalists alongside Arnold’s celebrity contacts the show can’t help but be funny with Arnold at the center. This is All the President’s Men by way of Curb Your Enthusiasm. Equal parts political intrigue and investigation with show business nonsense and family matters (his “war room” is constantly infiltrated by his toddler-aged children).

In making the announcement, Arnold said, “Nobody thought I could ever be an investigative journalist, but then again, nobody thought Donald Trump could be President. Let’s hope this marks the end of both our new careers.”

Arnold comes to the project with 35 years in the entertainment business, from stand-up comedy to sitcoms, films to philanthropy. He has built an extensive network of people from the above-the-title superstars and top executives to rank-and-file crew members. Bottom line: Arnold knows people who know things.

In addition to Arnold’s mining of his own friends and contacts, VICELAND has set up a secure website (www.viceland.com/tips) for any whistleblowers or sources to send leads or actual footage (all of which will be vetted and authenticated) to help Arnold on his quest for the truth.

What do you think? Are you a fan of Tom Arnold? Will you watch The Hunt for the Trump Tapes?

This Show was doomed from the start. And to say or rather make the infallible excuse that it was “a 1 season show” hilarious at best. CNN can’t even make that claim. As that channel will be dying As well. Tom Arnold like Alec Baldwin and Tom Hanks (Actors I mistakenly respected and loved in the past) are Hollywood elitist that have fork tongues. Saying one thing yet playing parts that contradict their supposed beliefs. If their conviction and words they say were so important they wouldn’t abandon them so easily for a paycheck they really don’t need……..

this is trash should not be on tv

No I won’t watch..I want entertainment. Not politics