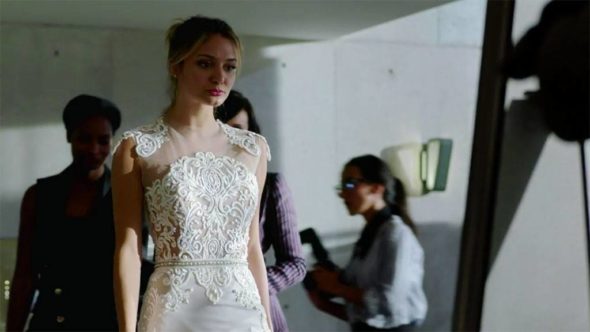 Does Megan’s fairy tale end here? Has The Arrangement TV show been cancelled or renewed for a third season on E!? The television vulture is watching all the latest cancellation and renewal news, so this page is the place to track the status of The Arrangement season three. Bookmark it, or subscribe for the latest updates. Remember, the television vulture is watching your shows. Are you?

An E! Entertainment love story, The Arrangement stars Josh Henderson, Christine Evangelista, Michael Vartan, Lexa Doig, Carra Patterson, Autum Reeser, Katharine Isabelle, Courtney Paige, and Jacob Artist. The drama follows struggling actress Megan Morrison (Evangelista) who enters into a relationship contract with superstar Kyle West (Henderson), a devotee of the Institute of the Higher Mind (IHM). When Kyle and Megan actually fall for each other, it complicates their relationship. Soon, secrets from their past threaten their love and their arrangement. Toward the end of the first season, Megan was kidnapped by IHM and confined to the Facility, until she submitted to the cult. In season two, she and Kyle struggle to reconnect as they plan their big wedding.

The second season of The Arrangement averaged a 0.19 rating in the 18-49 demographic with 420,000 viewers. Compared to season one, that’s down by 38% and 37%, respectively. Find out how The Arrangement stacks up against other scripted E! TV shows.

Will E! cancel or The Arrangement for season three? The ratings have been pretty consistent (though low) and are about the same as The Royals’ (the cable channel’s other original scripted series) so I think there will be a third season of The Arrangement. I’ll update this page with breaking news. Subscribe for free The Arrangement cancellation or renewal alerts.

What do you think? Were you hoping that The Arrangement TV show would be renewed for season three? Are you sorry that E! cancelled this TV show, instead?

Are you kidding…just watched 2 seasons and cxld…get 3rd season on…I want to see what happens…don’t waste my time enjoying a show then cxl..

Just binge watched 2 series, loved it. There has to be a season 3!

I’m disappointed there is not going to be a third season of The Arrangement!! Both seasons were full of twists I didn’t see coming. Very well done!!

You have to be kidding???!!!!! I never normally watch this kind of thing but I was absolutely hooked by the first episode. I binge watched two whole series to come to a statement saying NO SERIES 3>!!!! Are you serious?? How can you leave us hanging like that with loads of unanswered questions?? Its diabolical! We need an ending!! 🙁

Has to be another season to finish the story. Left on a cliffhanger. So unfair if season 3 doesn’t happen!!

Watched the show twice it was so good kept you hooked all the way through definitely need a Series 3 left you hanging whAt happens with Kyle and Megan and does IM finally come falling down lots of questions unanswered . Please do another season really well acted by all …

Just binged watched series 1 & 2 of The Arrangement- absolutely addictive. However completely devastated that series 3 was cancelled!!!
Please tell me some other network will pick up on how good this is and produce series 3 ?
All my friends and loads of us are watching it at the moment in the UK .
Loved the characters and the story line . The mind boggles at E canceling the show !

Absolute diabolical not a season 3 of the arrangement!! What kind of productions would leave it like that you should be ashamed absolute ****** productions