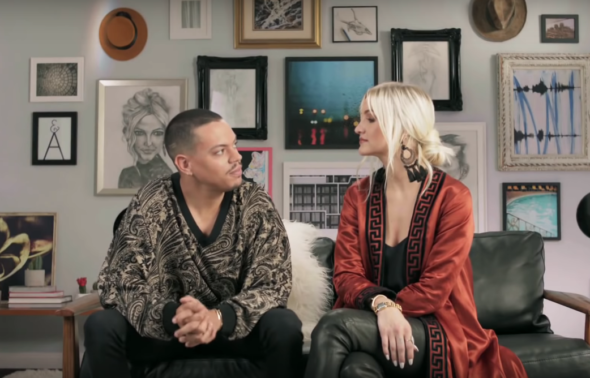 “This is the right time for us to work on our music.” E! just announced their new TV show, Ashlee+Evan, will premiere in September.

The docuseries follows married couple “Ashlee Simpson-Ross and Evan Ross as they juggle their lives as soul mates, parents, musicians and artists.”

LOS ANGELES-JULY 10, 2018- E! shows all you need is love, family and music with the series premiere of Ashlee+Evan beginning Sunday, September 9th at 10pm ET/PT. The six-episode series begins with an hour-long episode, followed by five half-hour episodes in the subsequent weeks. The cinematic docu-drama follows Ashlee Simpson-Ross and Evan Ross as they juggle their lives as soul mates, parents, musicians and artists. With the addition of their eclectic group of friends and famous family who fill their abode with laughter and love, there’s never a dull moment in this young duo’s household.

The non-stop life of Ashlee and Evan will showcase the modern day millennial renaissance couple raising a family while building on a burgeoning career. The series follows the pair and their tight-knit group of lifelong friends, sharing the couples’ creative process as they write and record their first duet album of soulful, authentic and reflective music. As a young woman who has been focused on raising two children, Ashlee is cautious about jumping back into the music world. However, she’s amped to record with her actor/artist husband, and Evan would have it no other way. The expressive couple is inspired to spread the love and share their unique gift to the world while raising children in Los Angeles, being interrupted by well-meaning friends and family and prioritizing family time coast to coast from sunny Palm Springs to Evan’s childhood home in Connecticut. Although this next phase of their life together will be filled with excitement and uncertainty, the couples’ determination and unwavering support of one another ensures they’ll be able to get it all done together.

For much of their lives, Ashlee and Evan have been in the spotlight. One of the biggest names in pop music in the early 2000s, Ashlee Simpson took the music industry by storm with her hit album, “Autobiography.” In addition to her successful career in film, television, and theatre, Ashlee took some time off in 2009 after becoming a full- time mom to son Bronx, now nine. After a chance meeting with musician, film and television actor Evan Ross in 2013 followed by whirlwind romance, Ashlee and Evan tied the knot in 2014 and welcomed their daughter Jagger Snow later that year. Their recent ventures also include a unisex clothing capsule line with Zadig & Voltaire they have conceived and designed named after their daughter Jagger Snow.”

What do you think? Are you a fan of Ashlee Simpson? Will you watch Ashlee+Evan?