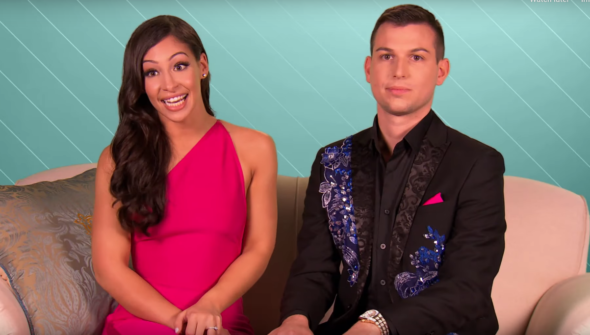 It’s time to Meet the Frasers. E! just announced the details for their new TV show.

LOS ANGELES – August 15, 2019 — E! Entertainment will make a big splash in the tiny state of Rhode Island with the half-hour reality sitcom “Meet the Frasers,” produced by MGM’s Evolution Media, premiering in 2020. Following Rhode Island’s local celebrity couple, 28-year-old psychic medium Matt Fraser and his pageant queen girlfriend, 21-year-old Alexa Papigiotis, the docu-series will showcase their lives, careers, and their very involved extended families. As Cranston’s emerging golden couple, the duo is recognized everywhere from their local Italian restaurant to the latest stop on Matt’s coast to coast tour. It doesn’t hurt that they’re often seen in an SUV branded with Matt’s face and name. This twosome is climbing their way to the top, with the biggest challenge being the opinionated loved ones who want to have a say in everything they do. For a sneak peek of what’s to come, please visit: Meet the Frasers.

“This series offers a hilarious look inside a loving, dynamic and always outspoken family,” said Amy Introcaso-Davis, Executive Vice President, Development & Production for E! “Matt and Alexa are homegrown celebrities on the rise, with personalities big enough to take over the small city of Cranston, Rhode Island and beyond.”

The members of this lively clan of eight are:

Matt Fraser – Matt is a vibrant go-getter with a taste for the finer things in life. As a psychic medium and author with a burgeoning career and a serious romantic relationship, the last two years of Matt’s life have been a whirlwind. He’s doing his best to balance his personal and professional aspirations and a family that doesn’t hold back when expressing their thoughts on both. Gallery Books, an imprint of Simon & Schuster, will publish Matt Fraser’s WHEN HEAVEN CALLS on March 31, 2020.

Alexa Papigiotis – The Former Miss Teen Rhode Island has her sights set on becoming Miss Rhode Island and is prepping for her second run at the title. She also serves as Matt’s assistant and sounding board. However, she’s not letting her career goals get in the way of her personal ones. After three years of dating Matt, she’s made it very clear to him that she’s ready for a ring and a wedding.

Maria Fraser – Maria is Matt’s younger sister, who’s witty, cynical, and the voice of reason. Although she works in the family business, she’s afraid of ghosts and still sleeps with all the lights on.

Angela Fraser – Matt’s mother Angela, who is psychic herself, could not be prouder of her son. As Matt’s office manager, sole member of his promotions department and chief helicopter parent, Angela works closely with him and constantly oversteps boundaries.

Rod Fraser – Matt’s father Rod is a retired Navy Captain and decorated former Fire Commissioner whose interests could not be further from Matt’s. While he loves his son, he’s skeptical of psychics and won’t watch Matt when he’s giving readings at events. Rod has a great relationship with Anthony Ciolli, Alexa’s stepdad.

Sharon Ciolli – Alexa’s mom Sharon shares her sentiment that Matt and Alexa need to get married and start a family ASAP. She’s a baby nurse with no filter, who is very comfortable talking about how babies are made, much to Alexa’s embarrassment.

Ava Papigiotis – Ava, Alexa’s younger sister, is a beautifully put together perfectionist. Ever the supportive sister, she’s training Alexa in the gym to get her into shape for the pageant.

Anthony Ciolli – Alexa and Ava’s stepfather Anthony is a retired nightclub owner and self-proclaimed former mobster with a quick temper and dry sense of humor. Family comes first with him, and he’s always treated Alexa and Ava like his own flesh and blood. “Tony Two Toes,” as he’s called, has only eight toes.

What do you think? Do you watch E!? Will you check out Meet the Frasers?

I love the show! Very entertaining.

I am really hopeful that they will do a second season ..would love to see the wedding !!