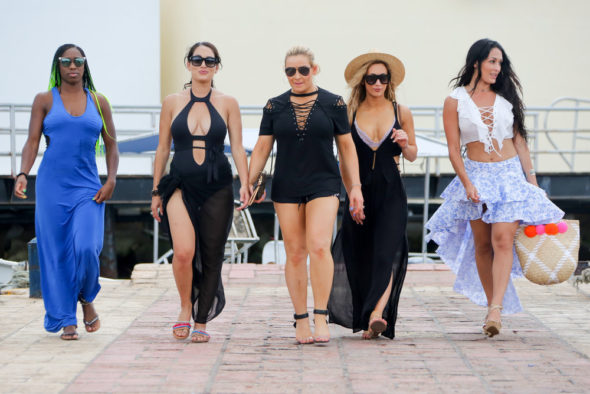 E! is doubling down on its diva quotient. The Total Divas TV show has been renewed for season eight and season nine on E!. The eighth season of Total Divas will premiere on a date TBD this fall.

LOS ANGELES, CA – MAY 7, 2018 – E! and WWE®’s fan-favorite TV series “Total Divas®” has been greenlit for seasons eight and nine. Later this fall, season eight will debut with a few familiar faces and even a blast from the past as the series follows several powerful and inspiring female WWE Superstars and gives viewers an exclusive glimpse inside their professional careers and the challenges of their everyday lives.

“We are thrilled to have celebrated the 100thepisode of this popular franchise and are grateful to announce two additional seasons,” said Amy Introcaso-Davis, E!’s Executive Vice President of Development and Production. “The series will continue to give a rare glimpse at a beloved cast of strong, diverse women whose big personalities, unique relationships and aspirational lifestyles have proven to resonate with our audience.”

Season 7 of Total Divas delivered 884k Total Viewers and 547k P18-49 and ranked among the Top 5 original programs on Wednesdays in Primetime (8-11pm) across ad-supported cable among key demo W18-34.*

Ratings Source: *Source: Nielsen, L3, premieres only, ranks are based on an avg. weekly ranking during its run and excludes sports, kids programming and specials. Median Age/ Gender Skew is P2+.

What do you think? Are you a fan of the Total Divas TV series? Do you plan to watch the eighth and ninth seasons on E!?