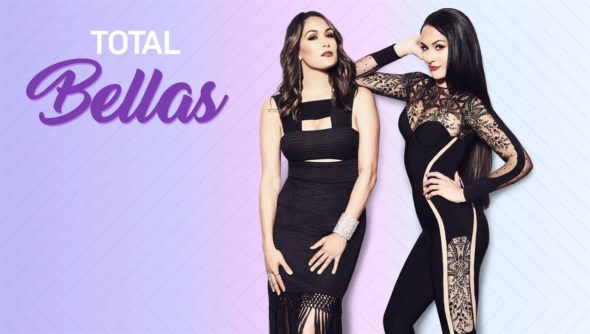 Total Bellas is back in action. E! just announced they’ve renewed the TV show for a fifth season.

The docuseries follows the personal and professional lives of WWE Superstars, The Bella Twins. The series’ fourth season “featured Nikki exploring life as a newly single woman, Nikki and Brie expanding their brands, Brie and husband WWE Superstar Daniel Bryan(R) juggling work and parenthood, and the Superstar twins’ return to the ring leading up to WWE’s first-ever all women’s pay-per-view event, Evolution(R).”

Season five of Total Bellas is slated to debut on E! in 2020.

Los Angeles, CA – June 21, 2019 – The hit series “Total Bellas,” following the lives of WWE(R) Superstars Nikki Bella(R) and Brie Bella(R), has been greenlit for a fifth season on E! Season four of “Total Bellas” featured Nikki exploring life as a newly single woman, Nikki and Brie expanding their brands, Brie and husband WWE Superstar Daniel Bryan(R) juggling work and parenthood, and the Superstar twins’ return to the ring leading up to WWE’s first-ever all women’s pay-per-view event, Evolution(R). The fifth season of “Total Bellas,” will consist of 10, hour-long episodes premiering in early 2020.

“Nikki and Brie have never shied away from revealing every aspect of their lives to our viewers,” said Amy Introcaso-Davis, Executive Vice President, Development and Production, E! “They’re strong women who are incredibly relatable and connect deeply with our audience.”

“We’re at a really exciting point in our lives, and can’t wait to take the Bella Army on this journey as we continue to work hard and inspire them to live their dreams,” said Brie Bella. “We’re looking forward to sharing our triumphs and challenges with our fans this season, and hope they all have as much fun as we’re having along the way,” added Nikki Bella.

The fourth season of “Total Bellas” ranked as a Top 3 program for E!, with an average of 783K total viewers. Sunday night premieres of the series consistently ranked among the Top 10 programs in Primetime across ad-supported cable networks among W18-34. “Total Bellas” ranked as a Top 2 most social Cable Reality series in Primetime on each of its premiere nights, averaging 151K Total Interactions across Facebook, Instagram and Twitter each Sunday night. The series also averaged 3MM engagements across all social media platforms (Facebook, Instagram, Twitter, YouTube) each week. “Total Bellas” currently has 1.3MM social followers, up +18% vs. season three. Nikki and Brie Bella have a combined following of more than 34MM social followers across Facebook, Instagram, Twitter and YouTube.

What do you think? Have you seen Total Bellas? Will you watch season five?

No watching for me, just wanted to ser if it was cancelled.