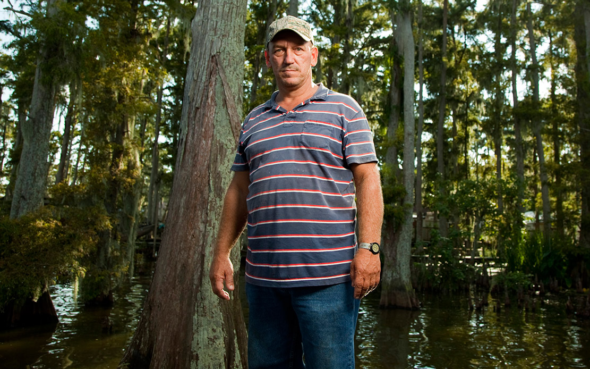 The docuseries will see Landry team with “local experts in a wild chase to help save America from hostile, menacing and often mysterious creatures.”

NEW YORK, NY – May 3, 2018 – Alligator season may be over in Louisiana but King of the Swamp, Troy Landry, is still on the hunt. Fielding distress calls from family, friends and neighbors across the South, Landry teams with local experts in a wild chase to help save America from hostile, menacing and often mysterious creatures. It’s a battle of wills between a legendary man and beasts in HISTORY’s new six-episode nonfiction series “Swamp Mysteries with Troy Landry,” premiering Thursday, June 7 at 10PM ET/PT following the season nine finale of HISTORY’s hit series “Swamp People.” After its debut, “Swamp Mysteries with Troy Landry” moves to its regular timeslot on Thursdays at 9PM ET/PT on HISTORY.

Landry’s travels lead him to confront “El Diablo,” a behemoth gator on the attack in Mississippi; “Garzilla,” a man-sized garfish with a taste for flesh in Louisiana; feral hogs in Texas; bull sharks in Louisiana; and pythons fighting gators in Florida – just a few of the many animals and locations investigated in each new episode. Using years of alligator hunting experience, Landry aids in tackling the threat posed by these intimidating animals as he discovers who they are and the myths behind them, and witnesses first-hand the havoc they can wreak on the environment, property and even residents.

To date, all telecasts of “Swamp People” have reached 46.3 million total viewers in Live +3 delivery.

What do you think? Are you a fan of Swamp People? Will you watch Swamp Mysteries with Troy Landry?

Troy you are so loved by all. Your love and kindness to everyone you come in contact with is definitely the heart of God. I love the way you pave the way for all men how to be a man of honor and standards. You’re beautiful inside and out…and so is your family. The respect you have for one another and others, is none existing in this crazy world. I love you all so much. Please never change. Take xare!

We watched the new show Swamp Mysteries. If there are thousands of killer pythons, why don’t they kill them when they find them?

Troy Landry is the real deal and a true legend still growing.
Where can I send some footage of my hog trapping and removal efforts along with an invite. ? Removing a 250 lbs plus bore from a 200 sq/ft trap up close . You can see the raw power of these killers 10 feet away unrestrained in plain day light.

Hi guys , just tuned in for the first time. I’m up here in California..so I don’t have all the info. Texans have more brains & common sense than most states.. people , great outdoorsman . So why doesn’t the local national guard, police , military just have some night practice, maneuvers & do some helicopter shooting? I knew these wild boars were dangerous, but killing livestock & endangering families that’s horrific!

We love to watch swamp people. And the new show looks very interesting. We will be watching

I love Swamp People and all the Landry’s and families on the show.. So yes, I will watch the new show too..

Love watching ” Swamp People”. I try hard not to miss am episode. I will definitely watch “Swamp Mysteries”. Troy Landry is my favorite!!

Troy is the best on TV these days and I’ll watch any show he does. The new show sounds terrific. Can’t wait!

Yes I sure will. Wish you would follow the crews during shrimp and crawfish seasons too.

I can’t wait. My family loves watching the Landry family. This no doubt will be just as entertaining and educational as Swamp People.

love Troy will for sure watch his new show

Love love love the show “Swamp People” and othe families on the show. Will watch any show associated