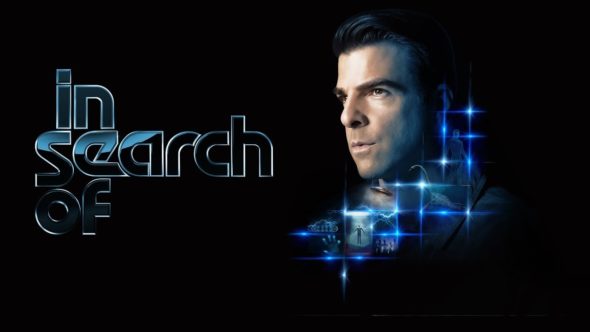 Big news for History fans! The network just announced they’ve renewed In Search Of for a second season and ordered a new TV show called The UnXplained.

Hosted by Zachary Quinto, In Search Of “delves into iconic mysteries such as aliens, lost civilizations, unidentified creatures, UFO sightings and more.” Meanwhile, The UnXplained will be hosted by another Star Trek alum, William Shatner, and “will explore the facts behind the world’s most fascinating, strange and inexplicable mysteries.”

Read more info from History below:

New York, NY – March 27, 2019 – HISTORY greenlights the nonfiction series “The UnXplained,” (working title) hosted and executive produced by Golden Globe(R) and Emmy Award(R) winning actor William Shatner (Star Trek, “Boston Legal”) and orders an eight-episode second season of its hit unscripted series “In Search Of,” hosted and executive produced by Emmy-nominated actor Zachary Quinto (Star Trek Franchise, Snowden, Margin Call). From Executive Producer Kevin Burns, the creator and producer of many of the network’s most popular series, including “Ancient Aliens” and “The Curse of Oak Island,” “The UnXplained” will explore the facts behind the world’s most fascinating, strange and inexplicable mysteries. Inspired by the iconic 1970s franchise originally hosted by Leonard Nimoy, “In Search Of” examines unexplained phenomena worldwide and is produced by Propagate Content, Universal Television Alternative Studio and Before the Door Pictures.

“Both ‘The UnXplained’ and ‘In Search Of’ strive to solve some of the world’s most intriguing mysteries and it’s this truth seeking that resonates most with our viewers,” said Eli Lehrer, Executive Vice President and Head of Programming, HISTORY. “These shows will offer credible answers to questions about mysterious phenomena, while others will remain unexplained. Who else better to transport audiences through this journey than William and Zachary, whose passion, curiosity and perseverance to present every side of these enigmas beam on screen.”

“The UnXplained” will also feature contributions from the world’s top scientists, historians, engineers and researchers – each seeking to shed light on how the seemingly impossible can happen. From mysterious structures such as Florida’s Coral Castle, and “evil” places as Japan’s “Suicide Forest,” to extraterrestrial sightings and bizarre rituals, the six-episode, one-hour series will tackle subjects that have mystified mankind for centuries.

From the mythical to the supernatural, “In Search Of” delves into iconic mysteries such as aliens, lost civilizations, unidentified creatures, UFO sightings and more. The series explores the greatest enigmas of our time and is told through the eyes of witnesses and scholars with a personal connection to the phenomenon. Each episode includes immersive demonstrations, historical context, and ground-breaking experiments. The original “In Search Of” series aired from 1977-1982 and was hosted by Rod Serling and later by Leonard Nimoy following Serling’s death. “In Search Of” reached 19 million viewers over the course of its first season.

“The UnXplained” joins “In Search Of” on HISTORY’s programming slate that includes: “Ancient Aliens,” one of the network’s longest running nonfiction series which reached over 80 million total viewers across total day in 2018; recently announced limited nonfiction series “Unidentified: Inside America’s UFO Investigation(TM),” from executive producer Tom DeLonge, in which a trustworthy, connected team of investigators will break boundaries and perceived government taboo by disclosing information about efforts being made to change government policy surrounding UFO phenomena; and hit scripted series “Project Blue Book,” from executive producer Robert Zemeckis and recently renewed for season two, based on the true investigations into UFOs and related phenomena conducted by the United States Air Force in the 1950s and 1960s.

What do you think? Have you seen In Search Of? Will you check out The UnXplained?