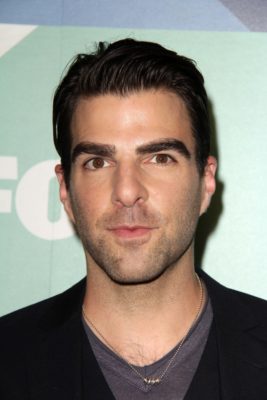 Zachary Quinto is taking over another Leonard Nimoy role. This week, History announced the American Horror Story star will host and executive produce a reboot of the classic TV series In Search Of.

Originally hosted Nimoy, the docuseries explores mysterious phenomena around the globe and throughout history. Topics included UFO sightings, missing persons, infamous cults, and paranormal creatures like Big Foot. The show ran in syndication from 1977 to 1982. The series was briefly reviving on Syfy in 2002, with Mitch Pileggi hosting.

Now, fellow Star Trek star Zachary Quinto will take Nimoy’s place as the new host of In Search Of. The History reboot will investigate “a different subject within a dynamic theme – such as alien encounters, mysterious creatures, UFO sightings, time travel and artificial intelligence – and searches for the truth to some of the world’s greatest mysteries.”

New York, NY – January 30, 2018 – HISTORY greenlights the ten episode unscripted series “In Search Of,” hosted and executive produced by Emmy-nominated actor Zachary Quinto (Star Trek, Snowden). Inspired by the iconic 1970s’ franchise, the series will examine unexplained phenomena from all over the world. UFOs and paranormal mysteries remain relevant as the Pentagon recently acknowledged a secret UFO program which investigated sightings of UFOs from 2007 – 2012.

“I am so excited to be reimagining ‘In Search Of’ and exploring new questions and phenomena with all of the advancements in science and technology from which we have benefitted in the past forty years since the original series first aired,” said Quinto. “In the spirit of my late dear friend Leonard Nimoy, we intend to honor and perpetuate his endless curiosity about the world – and universe – in which we live. Our director Eddie Schmidt and our partners at Propagate, Universal Television Alternative Studio and FremantleMedia International have ignited the process with enthusiasm and intelligence, and HISTORY is the perfect home for this unique and compelling series.”

“In the ‘70s and ‘80s, the legendary Leonard Nimoy captivated viewers by transporting them through the world of unsolved mysteries and paranormal phenomena,” said Eli Lehrer, Executive Vice President of Programming, HISTORY. “To this day, the investigations conducted in this series remain relevant and a source of public obsession. Now with Zachary’s passion and prevalence in the science fiction genre, the groundbreaking series is back for a new audience.”

From the mythical to the scientific, each episode will follow Quinto as he investigates a different subject within a dynamic theme – such as alien encounters, mysterious creatures, UFO sightings, time travel and artificial intelligence – and searches for the truth to some of the world’s greatest mysteries. “In Search Of” will explore enigmas told through the eyes of witnesses and scholars with a personal connection to the phenomenon and include immersive demonstrations and experiments that contextualize each episode’s theme. The original “In Search Of” series aired from 1977-1982 and was hosted by Rod Serling and later by Leonard Nimoy following Serling’s death.

What do you think? Are you a fan of the original In Search Of series? Will you watch the reboot?

In Search Of was a captivating series where I learned a lot. I’m very much looking forward to the reboot.

Continued: More specifically I learned the effect of various types of music on the growth of plants, hence on us humans. So it was not just conspiracy, it actually explored the more edgy science knowledge for the time – that is what I’m looking forward to – I hope they keep that aspect of this series.

Laurin Rinder
Reply to  Suzanne A.

I hope the show does great. I co wrote all the Music for the original show. Good Luck