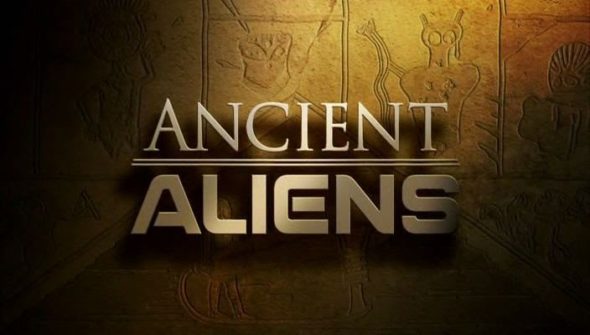 Ancient Aliens has returned. This week, History announced the TV show will return with new episodes in April.

NEW YORK, NY – March 29, 2018 – HISTORY’s hit series “Ancient Aliens” returns with a two hour premiere Friday, April 27 at 9PM ET/PT in its continued global search for proof that extraterrestrial life exists and these unknown lifeforms visited Earth thousands of years ago.  If aliens are among us, how have they impacted our world and how will people react to this discovery? From recent breaking news on the U.S. government’s funding of UFO research to recently discovered hidden facts behind chambers in Egypt’s Great Pyramid, each new episode covers various alien-related topics with historic detail, first-hand accounts and interviews with the world’s top scientists, archaeologists and researchers.

Lead expert Giorgio Tsoukalos joins Ancient Astronaut theorists, David Hatcher Childress, William Henry, Linda Moulton Howe, Erich von Daniken and many others being interviewed, as this season travels to over a dozen countries to explore firsthand signs of ancient alien visitation. On the island of Sardinia, Italy, ancient statues of giants with alien features are shown to the public for the first time; hidden messages are uncovered in the artwork of Leonardo da Vinci and strange alien-looking statues are explored on the Marquesa islands of the South Pacific.

What do you think? Are you a fan of Ancient Aliens? Will you watch the new season?

I watch AA all the time and I record all shows I cannot watch while at work. Is this show going to be back next season? I SURE HOPE SO. Best on TV

I dont care how much the “experts” and “mainstream scientists” disagree with the ideas presented by Ancient Aliens. More and more evidence continues to becone fact. Fact: 3 months ago the PENTAGON releases 3 VERY REAL fighter jet gun camera, radar/lidar/and FLIR footage of UFO’s interfering with a carrier group performing training exercises 70 miles off the coast of San Diego. Commander Day, sees over 10 uncorrelated targets on his scopes, and after also hearing the F/A 18 fighter pilots are presenting a safety issue and request an intercept; Cmdr Day then launches an intercept. His testimony is now fact.… Read more »

I’m a fan of Ancient Aliens. It’s a wonderful view of some phenomenal landscapes together with alternative ways to consider historical artifacts. I’m familiar with a lot of the sites and artifacts from a minor in Art History – but most back then were seen as religious artifacts. So the content is compelling – would be better if they lost the cheesy and repetitive “alien researchers believe….” language.

I am an avid fan of Ancient Aliens but for the last two seasons they have only done 2 hour shows (back to back episodes) and its basically re-hashed info…..nothing new. I am so disappointed with the series.

I love this series but my cable company has it on H2 which I do not get. I am so hoping that the new episodes will be broadcast on History and not only on H2!

I thought that H2 changed over to Viceland. At least they did in Nevada.

I really enjoy this series and I never miss an episode. The cast is great and offers varying viewpoints that many people may have never considered. It would seem that very little doubt exists that we are not alone and have been visited by extraterrestrials both in the ancient past and to this day present. To borrow a catch phrase from another popular television series, “The truth is out there!”