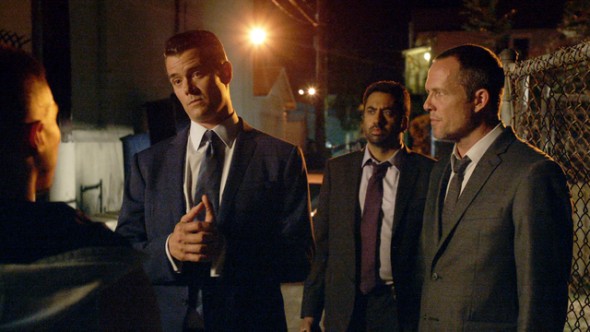 Between the competition from other channels and start time delays due to sports programming overruns, CBS has some real challenges on Sunday nights, particularly in the 10pm timeslot. Both The Mentalist (ended) and CSI (possibly cancelled) struggled this season. How’s newcomer Battle Creek been doing? Will it be renewed for a second season or will it be cancelled instead?

The series got off to a poor start with a 1.0 rating in the 18-49 demographic with 7.92 million viewers. That was a lower demo number than either CSI or Mentalist had hit this season. The viewership was pretty bad for a CBS show too.

In week two, the ratings for Battle Creek fell to a 0.83 in the demo with 6.93 million, a decline of 17% and 13% respectively. The numbers have gotten even worse in subsequent weeks — falling as low as a 0.7 rating and 5.58 million viewers.

Based on the ratings, there doesn’t seem to be any reason for CBS to renew Battle Creek for a second season. The numbers are just too low.

On the positive side, there are four episodes left after tonight’s airing. It looks like the network will let them air with the finale currently set for May 24th.

But, what do you think? Do you like the Battle Creek TV show on CBS? Do you think it should be cancelled or renewed for a second season? Is it a better show than what the ratings seem to indicate?

Do Not Cancel Battle Creek it is a wonderful show I loved it from the first show.

I love battle creek!! Bring it back

Please, please bring back BATTLE CREEK!!! Give it a better time slot. The story line is great and I love all of the characters.

My husband & I just finished watching Season 1 on Netflix & can’t believe it’s been cancelled. This series is so great – surely someone will pick it up.

I’m surprised. The show was a great show. It even got 5 stars on Rotten Tomatoes with a 95% approval rating. I’m not sure how they are picking shows to keep, but they keep canceling these shows that when put on Netflix get a ton of followers. It seems certain new shows get tons of promos and others no one knows about until their cancelled. One show I really wanted to see come back “Reckless”, CBS kept switching the night and time of the show and doing no promos about the switch. I almost didn’t see the two show finally… Read more »

They didn’t advertise this show very well because I did know it was on and if I didn’t know it was on it was because of them not advertising it well enough to care. I just last week found it on Netflix and it was such a great show I was look forward to the next season and when I noticed that they didn’t try hard enough with this show to keep it on it make me sick. And it’s sad another great show gets shot down because they didn’t care enough to advertise it CBS is the only station… Read more »

Renew, I have recommended it to many of my friends and family. Its a good show, without being vulgar, quality TV.

I want Battlecreek to be renewed, I enjoyed it and thought it was one of the best shows on TV.

I thoroughly enjoy Battle Creek. The interplay between the two police officers is clever, Whitley& fun. Would like to see it back

Sadly, we have all made our pleas to the network and they have and will ignore us. They have no desire to provide quality TV. The generation X’ers can’t stay with with a plot and that’s why they love the likes of Big Brother, the Great Race, etc. executives are only interested in satisfying young viewers.

There are too many stupid reality shows on TV and Battle Creek was a funny, smart show that many of us would prefer to the dribble offered. Sunday night is a bad time so we watched ‘on demand’ at our leisure – I am sure many other working people watched on demand also so they could get some sleep before Monday morning start. Put some of the dribble (Big Brother) on Sunday nights for those who do not have to get up, and put this show on another night and I bet it does well. (We do not live and… Read more »

I just watched again the last two episodes that I had saved like a special morsel. I was amazed at how it was even better second time around. I agree with you. There was an advertisement for Big Brother and I asked myself who watches this crap and it is still on TV. Go figure. Real dummie executives that want to dumb us down.

I would hope the show will make some sort of return. You see shows that are planning returns to TV. X-Files, Heroes, JAG and a few others. Also the summer run shows Under The Dome and Extant just finished their run of the series. Could that open up a spot for Battle Creek to be a summer replacement? I would hope the actors can come back to do their roles for the show.