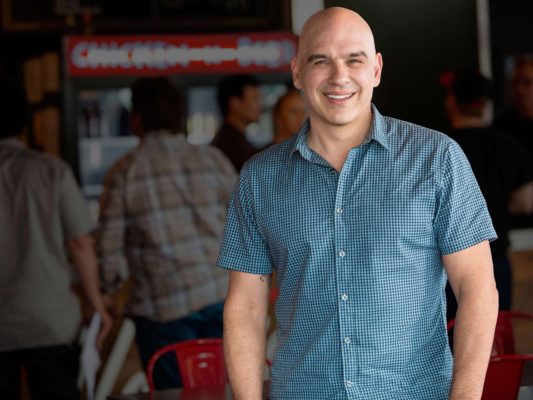 Burgers, Brew & ‘Que is back. This week, Cooking Channel announced the TV series will return with a new season in July.

The docuseries, which last aired in 2016, follows Michael Symon “as he tastes the most mouthwatering, decadent dishes, while washing it down with local beers and brews, sure to make any meal complete.”

NEW YORK – June 7, 2018 – Michael Symon continues his search for the best of the American classics – burgers and BBQ – on a new season of Burgers, Brew & ‘Que, premiering Tuesday, July 3rd at 9:00pm ET/6:00pm PT on Cooking Channel. Join Michael on a summer road trip as he tastes the most mouthwatering, decadent dishes, while washing it down with local beers and brews, sure to make any meal complete. Whether it’s mile-high cheeseburgers or slow smoked, fall-off-the-bone ribs, Michael is going to eat and meet his way through some of the best All-American spots to get your grub on

“Michael Symon’s passion and knowledge for these quintessential summertime dishes is evident during his travels, as he gives viewers a front row seat to all the deliciousness and fun,” said Courtney White, General Manager and Executive Vice President, Programming, Food Network and HGTV. “The food, brews, and stories that Michael shares at each location are a must for anyone planning the perfect summer getaway.”

Michael’s search for the best Burgers, Brew & ‘Que take him to some of the hottest culinary scenes around, including a stop in Asheville, North Carolina, where Michael smokes a whole hog in the traditional Carolina style for the juiciest, purest pork sandwich around. While in Savannah, Georgia, Michael finds a food truck serving up cheeseburger tacos with a house-made beer cheese sauce and a Jamaican jerk fried fish taco. In Seattle, Washington, behold a burger piled high with three different kinds of meat and cheese, and in Houston, Texas, witness a hot dog with chili pepper toppings so spicy you have to sign a release waiver just to order it. And don’t miss as Michael gets in touch with his Greek heritage in Queens, New York, with a classic lamb and feta cheeseburger, while sinking his teeth into an Italian-inspired burger stuffed with smoky mozzarella and prosciutto. Other destinations during the season include Phoenix, Arizona; Atlanta, Georgia; Charleston, South Carolina; and more.”

What do you think? Have you seen Burgers, Brew & ‘Que? Will you watch the new season?

Love the show. Just dropping a lot be about the best burgers, craft cocktails, and craft beer in Minnesota.
Rock Elm Tavern in Plymouth and Maple Grove, and Holman’s Table in St. Paul. Owners Troy Reding and Brad Sorenson have an amazing vision that deserves to be recognized.
Thanks for listening and please keep airing a great show!!

Glad you’re back! Love the show. Hope to see you guys in Jackson Mississippi at the award winning Pig and pint soon!

I loved the show when it first aired and watching Michael’s personality but What’s up with Michael doing play by play on the show with a overlay? He’s not even there like he was in the beginning, and I think this takes away from the show. If you don’t have time to be there at the place your talking up, then don’t even do the show.

So glad it was not canceled. Sorry that I am just now reading about it but we will catch up!

We love this show!!

Cool, I have it ready to record. I love the show.