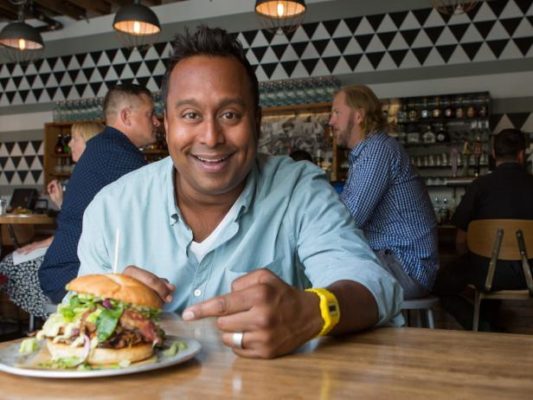 The docuseries follows “food blogger Ali Khan [as he] continues his pursuit across the country for the best deals on the best meals.” The new season will see Khan travel to Philadelphia, California, New York, Georgia, and South Carolina.

NEW YORK – February 27, 2018 – On the return of Cheap Eats, food blogger Ali Khan continues his search for new eateries serving up great taste at a good price. The new season of this budget-conscious culinary journey begins on Wednesday, March 21st at 10pmET/7pmPT and brings Ali to destinations across the country. With only 12 hours in each city, and only $35 to spend on breakfast, lunch, a snack, and dinner, he must prove that delicious dishes do not have to break the bank.

“Cheap Eats is one of Cooking Channel’s top original series, a clear indicator our viewers have a hunger for budget-friendly, high-quality food finds,” said Courtney White, Senior Vice President Programming, Scripps Networks Interactive. “The new season is sure to deliver as Ali follows his appetite to the best deals for the most unique meals across the country.”

The new season kicks off in Philadelphia, as Ali hunts for the most flavorful and affordable fare. He starts the day with a local favorite, as he learns how to make a scrapple sandwich with a fried egg and cheese dip. Then for lunch, he meets a chef creating a Philly original – roast pork with provolone and spinach. Before dinner, he satisfies a snack attack with dumplings filled with cheese steak, apple pie and cheesecake. Last but not least, to complete the day, he grabs a unique twist on ramen at a happening joint in Fishtown. Week to week Ali’s journey for budget bites will bring him to stops in Alabama, Arizona, California, Connecticut, Georgia, Nevada, New York, North Carolina, Massachusetts and South Carolina. In every city throughout the season, Ali starts that day with shallow pockets of only $35, but he finishes satisfied with a very full stomach!”

What do you think? Have you seen Cheap Eats? Will you watch the new season?