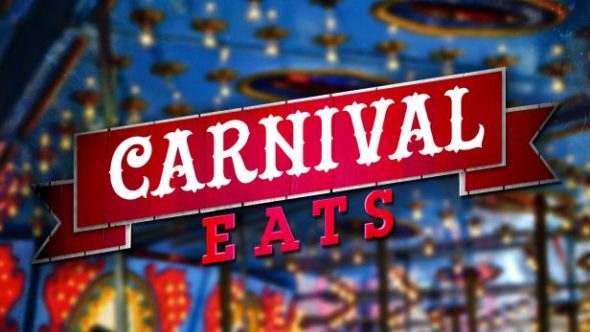 Carnival Eats is getting ready to return for its fifth season next month! The 13-episode season will return on October with an all-new journey through fairs and festival in North America.

Cooking Channel revealed more about the return of this series in a press release. Check that out below.

“On Thursday, October 26th at 9pmET/6pmPT the food-frenzied roller coaster of culinary delights returns on Cooking Channel’s Carnival Eats with the most delicious fare offered at fairgrounds in North America. In each of the 13 half-hour episodes, host Noah Cappe discovers the most unique and unimaginable bites served at midways, festivals and carnivals today. From mile-high stacked burgers with a funnel cake right in the middle, to hot chicken that is brined, fried, and smothered in hot sauce, Noah is tasting it all!

Fans can watch exclusive videos of the craziest carnival food and find tips for deep frying anything at CookingChannelTV.com/CarnivalEats. They can also join the conversation with #CarnivalEats and #IdFryThat.

Premiering Thursday, October 26th at 9pmET/6pmPT – SEASON PREMIERE! “Close Encounters of the Food Kind” Noah Cappe is hot on the trail of some out-of-this-world Carnival Eats at the UFO Festival in Roswell, New Mexico. From the Alien Egg to the Crashed UF-Dough, it’s good eating for earthlings. Later, Noah heads to California’s Orange County Fair where he tackles the massive Porky Leg and makes dreams come true with Deep Fried Pizza.

Premiering Thursday, November 2nd at 9pmET/6pmPT “The French Toast Connection” The day starts off the right way with a breakfast bang with French Toast Bacon Bombs at the San Diego County Fair. Then, Noah Cappe saddles up with the Maui Cowboy Burger and finds fried food fusion in the Deep Fried Nachos Supreme. At the La Porte County Fair in Indiana, it’s a trio of carnival twists on favorite foods, with the Port Belly Reuben, Deep Fried Lobster Mac & Cheese, and Giant Cream Puffs.

Premiering Thursday, November 9th at 9pmET/6pmPT “Million Dollar Baby Cakes” Noah Cappe spends the 4th of July celebrating in style at the annual Rio Rancho Pork & Brew Festival where he samples a trio of meatalicious meals before ending the day devouring the adorable Baby Cakes. Then it’s up North to Michigan, where the state’s largest free fair takes place where Noah enjoys The Tator Grenade and Churro S’mores.

Premiering Thursday, November 16th at 9pmET/6pmPT “Children of the Corn on the Cob” It’s a summer blockbuster as Noah Cappe samples the menu at the Three Rivers Festival in Fort Wayne, Indiana. From an Enchilada Funnel Cake to Bacon BBQ Corn, the hits keep coming. For the encore, Noah hits the Orange County Fair where he samples Drunken Pickle Pops and then captures the mysterious Pineapple Unicorn Bomb.

Premiering Thursday, November 23rd at 9pmET/6pmPT “Point Break-fast” Noah Cappe starts the day right at the Shasta District Fair in Anderson, CA, where he devours a Southern-style Biscuits ‘n’ Gravy Breakfast and rides off into the sunset with the Cowboy Funnel Cake. Next, he takes to the skies at the National Balloon Classic in Iowa, where there’s an Iowa-only pizza with his name on it.”

Are you a fan of Carnival Eats? Will you check out the new season? Tell us what you think.