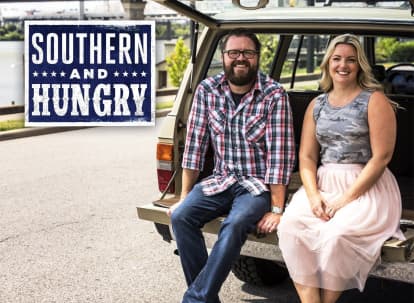 Are you a fan of Southern cuisine? Recently, Cooking Channel announced Southern and Hungry will return for a second season this month.

The docuseries follows Damaris Phillips and Rutledge Wood as they “take a road trip through the region stopping at beloved food spots that represent the tradition and innovation of the South.”

NEW YORK – July 2, 2018 – Born-and-bred Southerners Damaris Phillips and Rutledge Wood are obsessed with every aspect of Southern food, from the restaurants and recipes to the culture and people behind it. In the eight-episode return of their series Southern and Hungry, food expert Damaris and NASCAR personality Rutledge take a road trip through the region stopping at beloved food spots that represent the tradition and innovation of the South. From a Southern barbecue joint that incorporates Korean techniques in Charlotte, North Carolina; a classic Meat n’ Three with a Greek twist in Birmingham, Alabama and a crawfish boil in Lafayette, Louisiana to a fried Bologna Sandwich and Strawberry Hand Pie in Chattanooga, Tennessee and five-star Appalachian cuisine in the hills of the Smoky Mountains, this trip celebrates the best bites the region has to offer. Southern and Hungry premieres Monday, July 30th at 9pm ET/6pm PT on Cooking Channel.

“Southern and Hungry speaks to who Damaris and Rutledge are – their passion for food, culture and people is infectious and sure to entertain our audience,” said Courtney White, General Manager and Executive Vice President, Programming, Food Network, Cooking Channel and HGTV.

In the season two premiere, Damaris and Rutledge get their Southern food tour rolling in a growing city with an emerging food scene rooted in tradition – Charlotte, North Carolina. Their first stop is Brooks’ Sandwich House, a roadside shack that’s remained in the family for 45 years, and is famous for burgers smothered in their signature secret chili recipe. Next, they are in for a fried food flavor overload with Steak and Shrimp Hibachi Fries and House-Made Tater Tots from What the Fries food truck. The Charlotte food expedition wraps up at an amazing up-and-coming Southern barbecue joint called Seoul Food Meat Company, known for their creamy Ramen Mac and Cheese and mind-blowing Asian barbecue ribs. Upcoming episodes include visits to Asheville, North Carolina; Auburn, Alabama; Birmingham, Alabama; Biloxi, Mississippi; Chattanooga, Tennessee; Knoxville, Tennessee and Lafayette, Louisiana.

Southern spitfire Damaris Phillips won season nine of Food Network Star, leading the Louisville native to her own daytime series Southern at Heart; The Bobby and Damaris Show, which she hosted with Bobby Flay, and many other appearances on Food Network. She graduated from Jefferson Community and Technical College with a degree in Culinary Arts and then taught at the same school inspiring up-and-coming chefs to follow their dreams. One of five kids, Damaris learned to cook at an early age and was responsible for cooking one night a week for her large family. Damaris’ modern twist on Southern classics and her signature wit pack a one-two punch in the kitchen. Her first cookbook “Southern Girl Meets Vegetarian Boy” was published in October 2017.

Rutledge Wood has been around food and cars all his life. From buying, restoring and selling cars with his dad as a kid to sampling the latest creations at his parent’s BBQ restaurant, Rut’s roots run deep. After moving from Birmingham, Alabama to Peachtree City, Georgia and completing high school, Rutledge went on to graduate from the University of Georgia. He has hosted or co-hosted various NASCAR shows and events for Fox Sports, including SPEED Road Tour Challenge, NASCAR Smarts, and NASCAR Live, as well as the annual NASCAR Awards Banquet. Rutledge has also starred on History Channel’s Top Gear USA and Lost in Transmission. In 2015, Rutledge joined NBC Sports where he covers the biggest sporting events in the world from the Olympic Games in Rio and the Kentucky Derby to the Winter OIympics in South Korea.”

What do you think? Have you seen Southern and Hungry? Will you watch season two?

I will definitely watch Southern & Hungry these two have a good chemistry and I love the places they visit. What is the vehicle they drive?