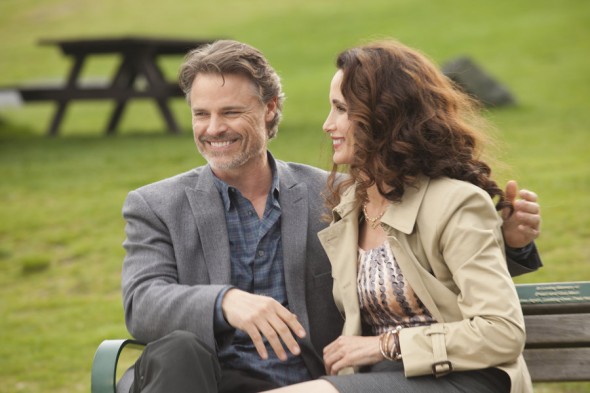 Production has begun on season two of Hallmark Channel’s original drama, Cedar Cove. The second season will begin airing on Sunday, July 20th, at 8pm. It’s unclear how many episodes have been ordered this time but the first season had a dozen installments.

What do you think? Are you looking forward to watching season two of Cedar Cove?

Season 1 aired in UK on 5USA CHANNEL a while ago and waited for season 2. Suddenly, episodes 5 and 6 appeared on consecutive weeks June 2015, and then nothing. Wa-a-a-a-a-h?
Will the series ever appear in region 2 format for UK viewers?

When will Netflix be airing Season 3 of Cedar Cove?

When is Season 2 Cedar Cove to be aired in UK & what TV channel please?
Beautiful setting, great actors. Hurry back pls!

Series 3 is due to air in the US this July and we haven’t even got a date for Season 2. Come on someone – please update us – when are we going to get Season 2?

If season 2 not on UK tv at least release on region 2 dvd’s please. Love Debbie’s books.

When is cedar cove series coming to uk

When is series 2 going to be shown in the UK?

Love this programme and fantastic scenery!

We absolutely love Cedar Cove and the plot and actors are great. Please continue to show the Cedar Cove episodes. We enjoy them so much and we a hoping they don’t end. Beautiful setting and love the series.Please keep them coming.

We need series 2 in UK. Fed up waiting

That’s exactly how we feel in the States with Downton Abbey, Mr. Selfridge, to name a few.

What season of Cedar Cove is 2014? And when does the new season start?

What season is coming in 2015 and what date does it start. i bought season 1 and loved it.

I absolutely love watching Cedar Cove and so does my mom. It is my favorite show on TV. It seemed like such a long time between Season 1 and Season 2. Can’t wait for Season 3. I’d like to see more episodes made.