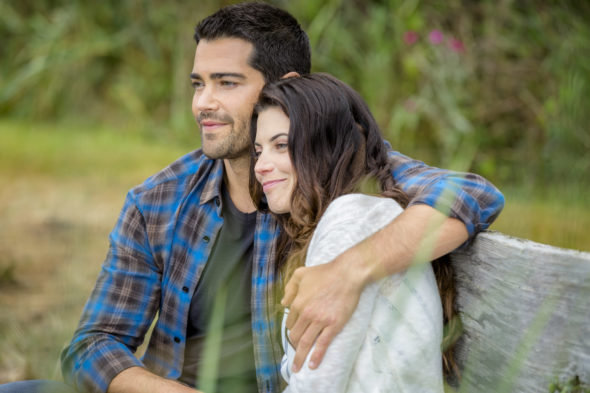 Are you ready for the new season of Chesapeake Shores? Recently, Hallmark announced season three will premiere in August.

Season three of the multi-generational family drama “Chesapeake Shores” follows Abby O’Brien (Meghan Ory), a high-powered career woman, divorcee and mother to twin daughters, as she adjusts to life back in her hometown of Chesapeake Shores. Rekindling her romance with Trace (Jesse Metcalfe), her former high school sweetheart, Abby discovers that their relationship will be rocked by not only his newfound fame, but also her responsibility to protect her daughters. Returning to her hometown also means engaging in the lives and loves of her siblings: Jess (Laci J. Mailey) a free-spirit and owner of a successful bed and breakfast; Bree (Emilie Ullerup), a former playwright who buys a bookstore in Chesapeake Shores who has written a family tell-all; Kevin (Brendan Penny), a soldier adjusting to civilian life, a new career and a newly serious romance; and Connor (Andrew Francis), a lawyer who is finally stepping out of his brother’s shadow. With the support of their uncompromising, highly successful businessman-father, Mick (Treat Williams), their once-estranged mother, Megan (Barbara Niven), and their wise grandmother Nell (Diane Ladd), the O’Briens are a family that must face life’s challenges, but always finds hope in their enduring love toward one another as they navigate life, love, career and romance.

What do you think? Have you seen Chesapeake Shores? Will you watch the new season?

Hallmark should consider rerunning CS to get more viewers and refresh the series for those who may have missed episodes or want begin watching. I am currently enjoying reruns of Cedar Cove, but, wish Hallmark would finish this series as well.

This show is so good I forget that they are not real. Like Bree, you hate to pick up the good books because you are always sad when they end. I enjoy the realistic conversations that show putting family first has its challenges but definitely it’s rewards.

I cannot wait for the season of CS to begin. I love watching this series and look forward to another season. Please do not cancel this like you did Cedar Cove. That too was a great series.

I LOVE this show and can not wait for CS to begin in early August! I love the interaction between this big Irish family. It reminds me of my own.

I love Chesapeake Shores, it is such a good show. It shows that even though the O’Brien family is far from perfect they still always have each other’s back. I am really looking forward to Season 3.

Love this show. We need more like it. Thanks for renewing.

The show is great! Please keep it in the Hallmark line-up

The show plus good entertainment and should remain in the Hallmark line-up,

It’s good news. But if they ever decide to end the series, hopefully they will give it closure. Their previous series of a couple years ago, Cedar Cove was not given this chance. This series has done very well since it left the air and should be revived to give it closure. Listen to your fans!

Can’t wait to see the new episodes! this show

Yes, I’m looking forward to watching the third season of Chesapeake Shores. I’m a little disappointed that I/all of us viewers have to pay to watch the re-runs of seasons 1 and 2. We are already paying to have the Hallmark Channel in our homes. You are charging us twice, it is just wrong and bad business.

I had read the book before the series started and was excited to see the TV version. Although I was disappointed at first that the TV series did not follow the book, I soon gave into it and just enjoyed the story being presented and seeing the characters I had enjoyed in the book. I was glad to see a second season announced, and now really look forward to a third season. Can’t wait!

Yes, I have watched it from it’s beginning. I am so delighted and beside myself that Hallmark is continuing it again this fall! One of the best TV series ever!!!!!